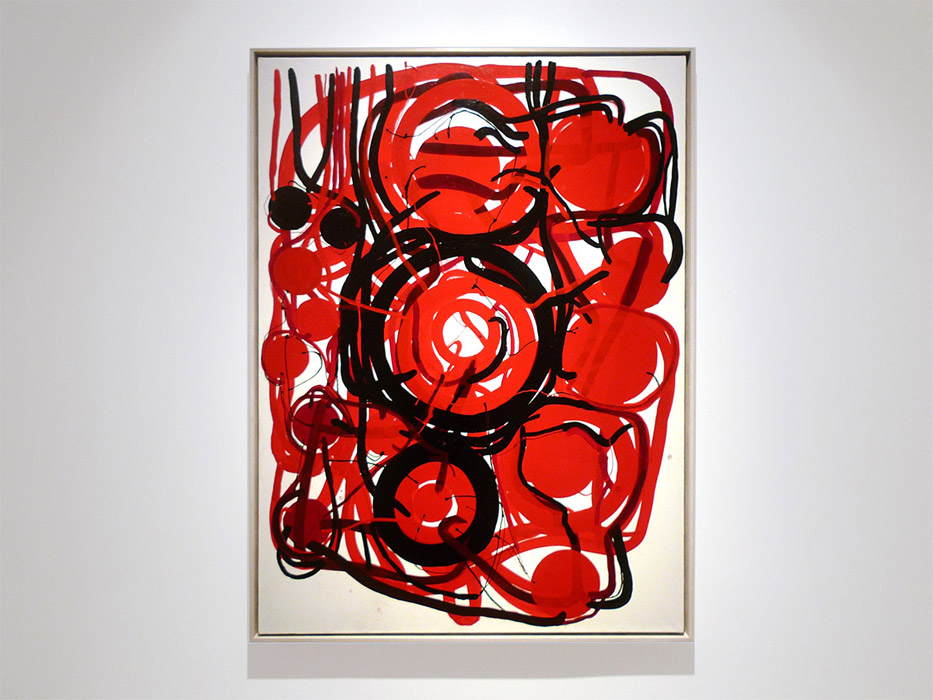 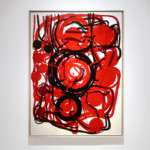 Taka Ishii Gallery New York is pleased to present a two-person exhibition of works by Shozo Shimamoto and Atsuko Tanaka. Shimamoto and Tanaka were key members of the Gutai Art Association, which played a seminal role in the development of postwar Japanese art. Based in Kansai, since the early 1950s at the start of Japanese contemporary art world, the artists produced and exhibited revolutionary works unencumbered by existent art practices and received acclaim both domestically and internationally.

The avant-garde art collective Gutai Art Association was formed under the leadership of Jiro Yoshihara, who had been an influential figure in Japanese art since the prewar period, to establish new foundations for art. Shimamoto, a founding member of Gutai, began making abstract paintings in college and began studying under Yoshihara in 1947. Shimamoto, who had been making avant-garde works, such as those in which holes were cut out of a newspaper support, prior to the formation of Gutai, created experience-based works such as “Please Walk on Top” (1955) and “cannon shooting paintings” (1956), produced by catapulting paint at a canvas. At the Second Gutai Art Exhibition, held at Ohara Kaikan in Aoyama, Tokyo, he presented his trademark “throwing paintings” (1956) made by positioning a rock at the center of a canvas laid on the ground, and throwing bottles filled with paint and other objects at the rock. Divorced from the conventional paintbrush, the throwing method deployed a great deal of chance and produced works with strong presence that transgressed the artist’s intention.

As the latest trends in American and European art were introduced to Japan one after another after the war, Atsuko Tanaka searched for a new direction distinct from European representational painting. Around 1953, under advice from Akira Kanayama, with whom she was studying at the Art Institute of Osaka Municipal Museum of Art, she made “Calendar”, which featured a numerical motif and deepened her interest in abstract art. Later, she joined the Zero Society formed by Kanayama, Kazuo Shiraga, and Saburo Murakami (all future Gutai members) to create progressive works. In 1955, Tanaka joined the Gutai Art Association. Her works made as a Gutai member include “Work (Bell)” (1955), comprising a switch, which, when pressed by viewers, sounds 20 bells installed along the floor of the gallery and “Electric Dress” (1956), made of approximately 200 lightbulbs and tubes painted in nine colors of synthetic resin enamel paint, which she wore as a performance. Her innovative works incorporated immaterial media, such as electricity, sound, space, and time and were presented as installations and performances and received great acclaim. They represented the avant-garde spirit of the Gutai and stood out even from the works of fellow Gutai members. Starting in the mid-1950s and for the rest of her life, Tanaka made a unique body of two dimensional works that featured circular forms and connecting lines evoking the light bulbs and wires of Electric Dress.

After the French art critic Michel Tapié, who advocated the abstract painting movement “art informel” visited Japan in 1957 and championed the group, Gutai’s activities gained global recognition and acclaim for their unique creativity unfettered by conventional notions of art. The reevaluation of the Gutai Art Association’s output in Japan started in the 1980s. Gutai’s works, filled with creative energy that symbolizes the era of postwar recovery, has received increasing attention in recent years.

Shozo Shimamoto, born in Osaka in 1928 (died in 2013). Entered Kansai Gakuin University, Philosophy Department, Faculty of Social Sciences in 1947 and began studying under Jiro Yoshihara. Shimamoto graduated from the same University’s Literature Department in 1950. He became a founding member of the Gutai Art Association in 1954 and remained active as a core member. In 1956, he presents his “throwing painting” at the Second Gutai Art Exhibition. For the sixth volume of Gutai magazine, published in 1957, he contributed his essay “The Execution of Paintbrushes.” In 1975, he joined the Artist Union (AU). He is the author of “Geijutsu to wa hito wo odorokaserukotodearu” [Art means surprising people] (Mainichi Shimbunsha, 1994) and “Boku wa koshite sekainoyondai artisto ni natta” [How I became one of the four greatest artists in the world] (Mainichi Shimbunsha, 2001). In 1999, he received the Medal with Dark-Blue Ribbon. His works are included in major public collections including the Centre Pompidou (Paris), Galleria Nazionale d’Arte Moderna e Contemporanea (Rome), Tate Modern (London), National Museum of Art (Osaka), and Museum of Contemporary Art, Tokyo.

Atsuko Tanaka, born in 1932 in Osaka (died 2005). Entered and withdrew from Kyoto Municipal College of Art in 1951 and transferred to the Art Institute of Osaka Municipal Museum of Art. Under advice from Akira Kanayama, who was also studying at the same school, Tanaka developed an interest in abstract art. Later, she joined the Zero Society formed by Kanayama, Kazuo Shiraga, and Saburo Murakami. In 1955, Tanaka joined and became a key member of the Jiro Yoshihara-lead Gutai Art Association along with Kanayama, Shiraga, and Murakami. That same year, she presented “Work (Bell)” at the First Gutai Art Exhibition and Electric Dress at the Second Gutai Art Exhibition in 1956. She continued to produce works vigorously after leaving Gutai in 1965. Her major solo exhibitions include “Atsuko Tanaka: Search for an Unknown Aesthetic, 1954-2000” at Ashiya Museum of Art & History and Shizuoka Prefectural Museum of Art (2001), “Electrifying Art: Atsuko Tanaka, 1954-1968” at Grey Art Gallery (2004), “Atsuko Tanaka: Art of Connecting” at Museum of Contemporary Art Tokyo (2012, traveled from Ikon Gallery and Espai d’Art Contemporani de Castello). Her works were also included in “documenta 12” (2007) and the “16th Sydney Biennale” (2008).