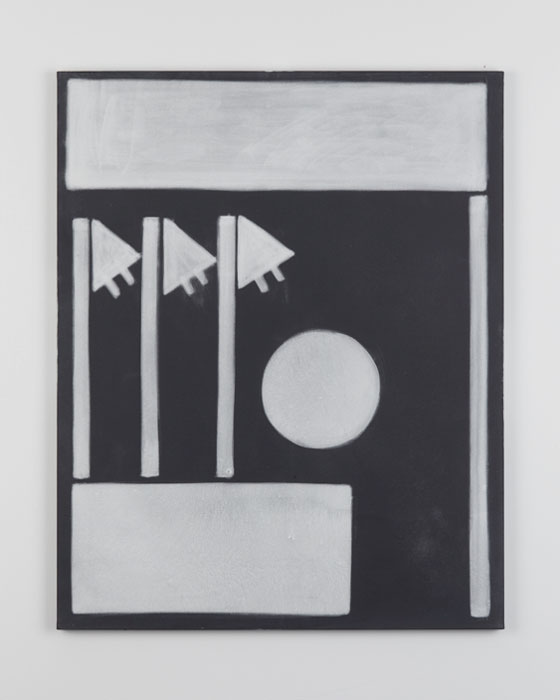 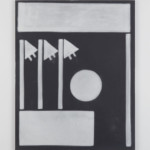 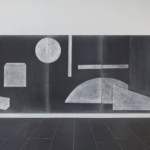 The title of the exhibition refers to a journal of poetry Kurt Schwitters published in 1931 in Hannover. The journal brought together a selection of poems by his peers. Schwitters’ own poem “Veilchen” (Violets) was printed on the cover as both an address to the reader and a statement of intent from the artist, who likens the small and beautiful flowers that have the strength to grow under almost any conditions, to the poems presented in the journal.

The group of paintings in the exhibition take their starting point from the Schwitters journal. They range from landscapes to paintings based on historical documentation of stage design and performance. By transforming the space with her painting process of building and removing layers of watercolor, Otto-Knapp creates degrees of transparency and opacity with layers of movement in one uninterrupted surface. Her paintings could be compared to looking at a photographic negative where there is a constant play of negative and positive, producing an unstable space that nevertheless has a distinct physical presence.

For this exhibition, a group of smaller paintings are shown with one large multi-panel painting. The large painting “Stage (After Schwitters)” introduces both architectural and theatrical space.

In the mid 1920s, Schwitters developed a concept for theaters he called “Normalbühne” [Standard (or Normal) Stage]. Influenced by the economy and pragmatism of Constructivism, he wanted to design elements for a stage that would work with any text or form of production. He imagined every theater would have a set of the props and the technical instructions necessary to operate them. His design makes use of abstract shapes such as the cube, sphere, circle, steps, rectangles, squares, etc. that can be used to construct a theatrical space that plays with depth and illusion.

Otto-Knapp’s painting imagines a stage set that uses these instructions, while also anticipating the many possible new combinations and constellations they allow.

Born in 1970 in Osnabrück, Silke Otto-Knapp majored in cultural studies at the University of Hildesheim and received her MFA from Chelsea College of Art and Design in London. She has held solo exhibitions at the Midway Contemporary Art, Minneapolis (2017); the Art Gallery of Ontario, Toronto (2015); the Kunsthalle Wien and the Camden Arts Centre, London (2014); the Kunsthal Charlottenborg, Copenhagen (2013); the Kunstverein Munich (2010); and the Tate Britain, London (2005). She has also participated in many group exhibitions, including the Liverpool Biennal 2018, “Beautiful world where are you?”; “Made in L.A. 2016: a, the, though, only”, the Hammer Museum, Los Angeles (2016); “Sacré 101 – An Exhibition Based on The Rite of Spring”, the Migros Museum für Gegenwartskunst, Zurich (2014); “Dance/Draw”, the ICA, Boston, MA (2011); and the 9th International Istanbul Biennial (2005).