Sophia Narrett – Early in the Game 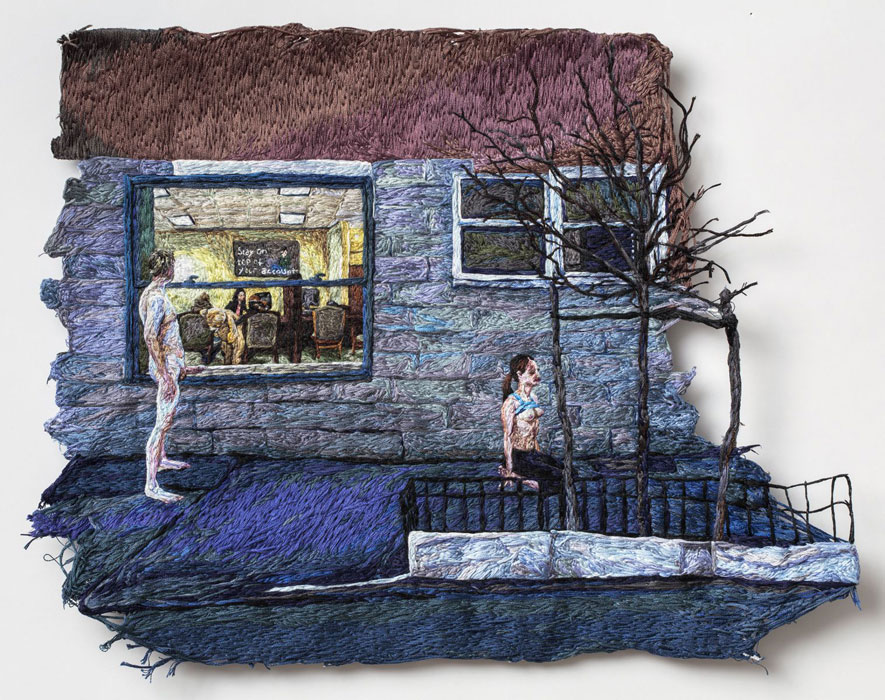 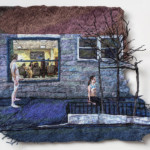 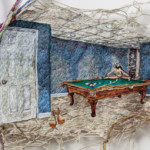 Freight + Volume is pleased to present Sophia Narrett’s new solo exhibition “Early in the Game”. For this exhibition, Narrett has created a body of embroidered wall pieces that weave a psychologically charged narrative. Accompanying the exhibition will be a full color limited edition book, available for sale.

“Early in the Game” expands on themes common to Narrett’s recent work including escapism, desire, and the evolving nature of identity. Her highly contemporary narrative unfolds through the language of a deeply historical medium. Although the origins of embroidery date back to as early as 5th century B.C., it has a distinct socio-economic history in America, wherein prior to the implementation of a public education system, it was one of several formal skills young girls were taught in a spirit of homemaking practicality. Narrett redefines this conventionally domestic craft and imbues the work with a haunting cerebral quality. Her painterly approach to threadwork hints at the swirling, undulating mark-making of the Impressionists, while her images evoke the surrealist croon of Dorothea Tanning.

Although the warm thread constructs a personal narrative, the work opens itself to each viewer’s projections. The three phases of the story unfold as a collaged dream sequence, similar to the twisted composition of a David Lynch film. The characters’ behaviors are governed by a social code not easily hacked, and their features and bodies seem protected by the very thread that defines them. Each section is marked by the inclusion of a small embroidery serving as a narrative key. The first of which, titled “Card One: Cry”, depicts a woman on a porch amidst an overwhelming number of CVS bags. Her shoulders are slumped, her head hung in sadness as she resigns herself captive to the beauty products she just purchased.

From there, the characters include a woman wrapped in a gray blanket crying on the floor beneath an image of Ari Gold in a gilded frame, a nude man with an erection looking through a bank window at a couple applying for a loan, a row of eligible bachelors framed by Tinder buttons and Band-Aids, and a group of bathers in a pool with no water lounging in a backyard whose stone path creates a mutated labyrinth filled with wanderers beholden to IV drips. This frenzied cast eventually builds to a conclusion purposefully free of catharsis. The third group of images, set in four finished basements, leaves us witness to an array of fragmented erotic interactions, in which the characters seem immersed in complex efforts of imagination, as they strive to navigate relationships and find distraction in pleasure. Sometimes this strikes a humorous note, “When Your Heart is Open” describes an unorthodox game of miniature golf in the basement of a for-sale home, however the images remain sincere as they point to the immersive and potentially transformative experience of collaborative emotional and sexual play.

Narrett states that she is interested in “using fiction to consider roleplay and its capacity to initiate self discovery, alleviate pain, build relationships and offer joy, as well as its potential to lead to situations of miscommunication, abandonment, and manipulation.” At times it is unclear whether the artist lays her own heart bare or confronts and implicates the viewer. The wild oscillation between these states of vulnerability and satire creates an atmosphere of permission, inviting the viewer on a tour of their own unconscious desires and anxieties.