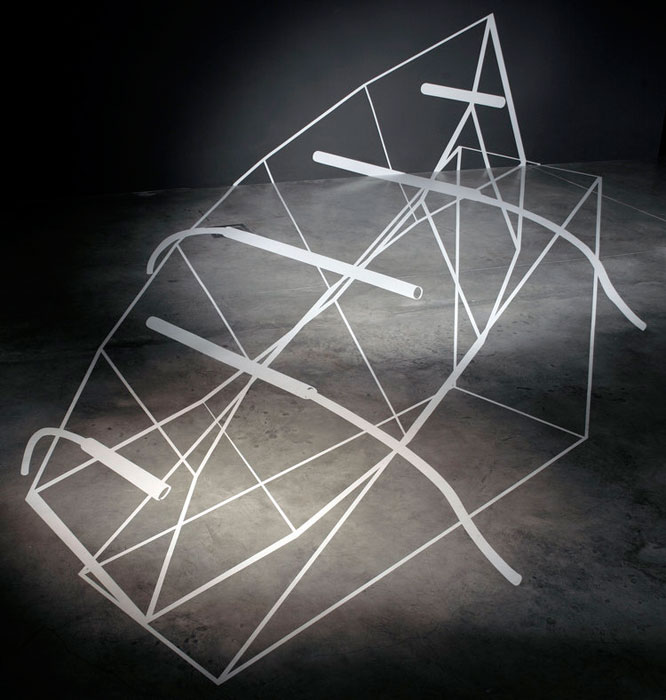 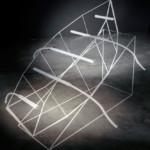 Spanning across a range of media including drawing, installation, sculpture and video, the featured artists unite to create a site-responsive display. The transference of power to (post) truth travels through different temporalities, casting alternative webs of realities. In particular, two main site-responsive installations by Nadia Kaabi-Linke and Ergin Çavuşoğlu seek to complicate normative ideas of looking and deciphering both conscious and unconscious bias. Kaabi-Linke’s “Mistake-Out” (2018) is a site specific wall based mosaic installation created from over 400 fragmented pieces made from newspaper sheets that have been painted on with white correction fluid. The pieces are traces from a wall that was previously riddled with bullet holes from the publishing district in Berlin and alludes to the censorship and whitewashing of the press, the work highlights the dubious editorial process of how news is transmitted and received.

Çavuşoğlu remaps the gallery’s architecture to produce a scaled anamorphic floor drawing entitled “Silent Systems” (2011) that employs optical illusion. The drawing is composed of a 3D rendering of a ship and references Noah’s Arc one of the first migratory vessels. Audiences are invited to interact with the drawing by walking across its entire surface and this act is recorded via a security camera, which relays this interaction onto a monitor displaying what appears to be surreal images of audience members walking inside a sculpture. The work is inspired by a dream sequence featured in a corresponding video “And I Awoke” (2012) which takes its inspiration from Russian writer Leo Tolstoy’s “A Confession” and its famous dream sequence, of a man entangled in rope on a bed.

By contrast, Shahpour Pouyan‘s series “Memory Drawings” (2015-16) explore the symbolic relationship between the preservation of architecture and the articulation of images as relayed by his own memory. Encompassing a series of 39 drawings Pouyan memorializes the tomb of the 11th century Murqanas dome of a mausoleum near Mosul, Iraq that was destroyed by ISIS as part of a systematic attack on architecture and heritage. Furthermore, the theme of deconstruction and erasure is also taken up by Mounir Fatmi within his recent experimental video “The Human Factor” (2018), which poetically reflects upon the formation of Art Deco and its relationship to exoticism from a post-colonial lens.

Completing the selection of works is James Clar‘s “Wake Up” (2012), a fully functioning alarm clock placed within a soundproof vacuum chamber, which probes the visual language of the readymade to signal the precarity of reality. This piece is juxtaposed by a new LED light work that Clar made specially for the exhibition entitled “New Dawn” (2019), depicting the sun rising and clearing the fog as an allegory for paradoxical social, cultural and political conditions.

The distinctive artworks that are presented within “Speaking Power to (Post) Truth” purposely resist fixed narratives and seek to create new visual maps of the real as articulated by five individual studio practices. Functioning as important interlocutors between multiple ‘truths’ the exhibition presents a dynamic conversation between symbolism and abstraction to reveal both overt and covert truths to arrive at a post truth moment.