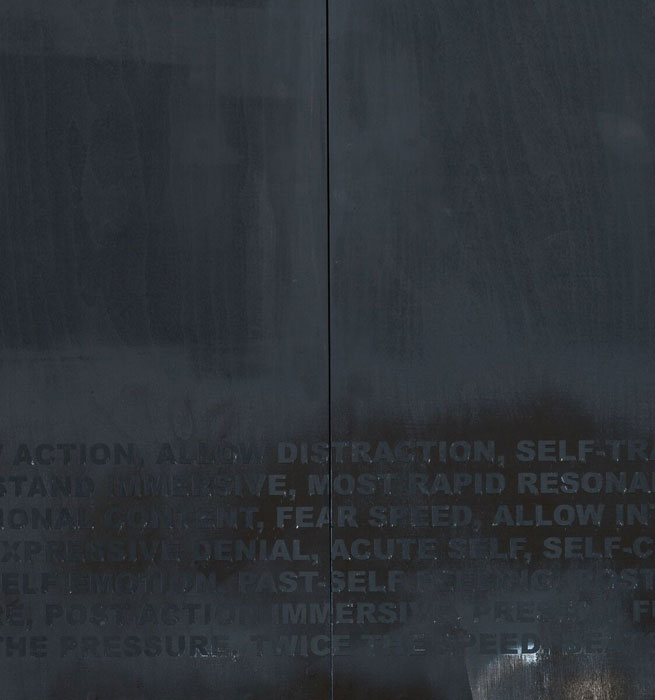 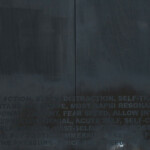 For his exhibition at Hauser & Wirth London, Stefan Brüggemann takes the title of the exhibition, ‘HYPER-PALIMPSEST’, as a point of departure. The resulting site-specific installation creates an immersive space for active reflection by allowing layers of political and cultural history to be overlaid with the artist’s timeless and iconic text statements.

Encompassing sculpture, video, painting, and drawing, Brüggemann’s work deploys text in conceptual installations rich with acerbic social critique and a post pop aesthetic. His oeuvre is characterised by an ironic conflation of Conceptualism and Minimalism with a punk attitude. In this way, Brüggemann’s practice sits outside the canon of the conceptual artists practicing in the 1960s and 1970s, who sought dematerialisation and rejected the commercialisation of art. ‘I have always been interested in the strategy of conceptual art,’ he says, ‘not from a political point of view but more as a mechanism for communication.’

Brüggemann’s reference to the concept of the ‘palimpsest’ relates to both to the physical process of creating the installation, itself a performative act, and the conceptual impact of layering of text. A ‘palimpsest’ is defined as a writing material such as a parchment or tablet that is used repeatedly after the earlier writing has been erased. In colloquial usage, the term palimpsest is also used to denote an object made or worked upon for one purpose and later re-used for another. For the exhibition, the walls of the gallery space are clad in plywood panels, a choice of material which carries connotations of activism, boarded up buildings and placards. These panels are initially painted black before Brüggemann’s past catalogue of texts are applied, this lettering is obscured with a further layer of spray-painted text and is then removed to reveal the original statements as a residue or trace.

Along with obliteration, the artist uses appropriation to create a disconnect between words and their meaning. For the penultimate step in the process of creating the installation, the spray-painted text is from an earlier work, ‘Headlines and Last Line in the Movies’, a series the artist began in 2010 in which sentences taken from current news headlines are merged with the finishing lines of popular films. In addition to the monochromatic panels which line the gallery space, Brüggemann incorporates a new work into the installation – a sound piece that the artist made in late 2018 – as a final layer of his ‘palimpsest’. This element features audio recordings by one of his heroes, Iggy Pop, reading the artist’s entire catalogue of text statements that span back to the late 1990s which plays every 45 minutes. To activate the space during the course of the exhibition, Brüggemann invites the audience to participate in a series of yoga sessions characterised by deep breathing techniques.

Brüggemann’s choice of words is typically provocative and topical, the text pieces in this exhibition include statements such as ‘IDEOLOGY IS OVER’ and ‘THIS WORK IS REALIZED WHEN I DIE’. The philosophy of language is a crucial tenet in the artist’s practice in which text functions as a fluid medium. Writing, rewriting and overwriting imply a perpetual interrogation of form and meaning in which words are unhinged from both their cultural context and an author’s voice. This theme of mutability has appeared previously in the artist’s work, for example in his recent exhibition at the Kunsthalle Bern in which all the statements in the exhibition were superimposed in the final room forming a visual cacophony of text. In this way, the individual projects are interwoven by Brüggemann through his perpetual questioning of conceptual strategies and his masterful wordplay.

Spanning – and sometimes combining – sculpture, video, painting, and drawing, Stefan Brüggemann’s work deploys text in conceptual installations rich with acerbic social critique and a post pop aesthetic. Born in Mexico City and working between Mexico and London, the artist’s oeuvre is characterized by an ironic conflation of Conceptualism and Minimalism. In this way, Brüggemann’s practice sits outside the canon of the conceptual artists practicing in the 1960s and 1970s, who sought dematerialisation and rejected the commercialisation of art. Instead his aesthetic is refined and luxurious, whilst maintaining a punk attitude.

The philosophy of language is a crucial tenet in Brüggemann’s practice, in which text functions as a fluid medium, utilized for both form and meaning; his choice of words typically provocative, acerbic and topical. Brüggemann’s masterful wordplay and conceptual rigour coalesce to create a bold and pertinent body of work focusing on themes of appropriation and displacement.