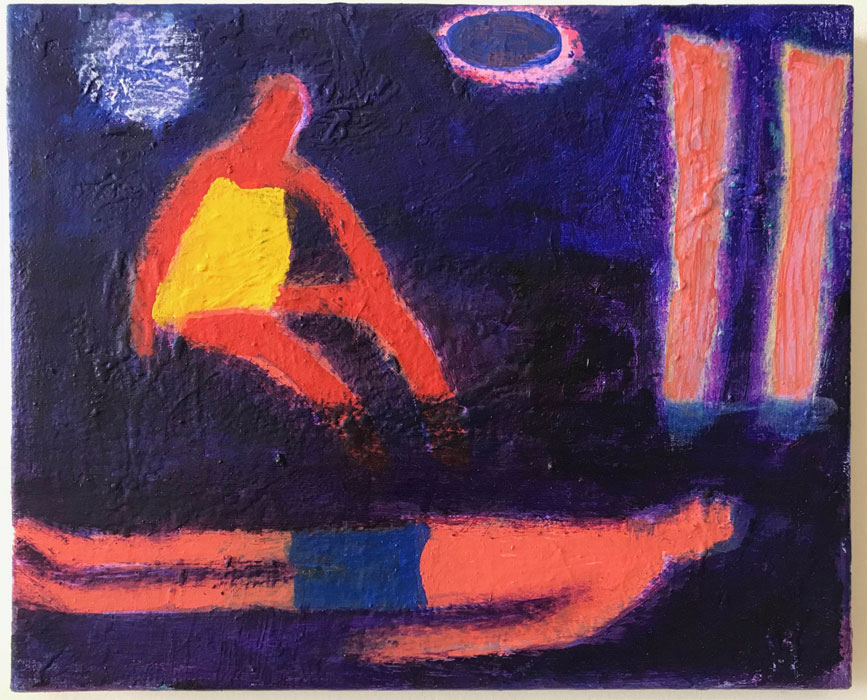 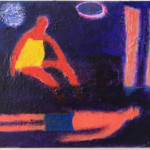 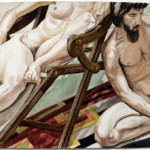 Philip Pearlstein‘s typically visceral, pastel 70s era nudes are a welcome contribution to “Summer of Love”. A melancholy, serious couple, portrayed sitting in repose in lawn chairs, possibly before or after sex, fills the viewer with the ennui often accompanying carnal love. In a similar vein, Jenna Gribbon paints a nude woman smoking a cigarette from the perspective of her lover, though their entangled limbs imply intimacy and connection rather than alienation. Bendix Harms‘ playful and funny, mythologically attuned drawings of heart-shaped birds and enrapt lovers celebrate love and innocence. Orly Cogan offers delicate and beautiful subversive embroidered stories that depict relationships that combine fairy tale with contemporary power struggles.

Bel Fullana depicts a childlike couple engaged in doggy-style outdoor sex complete with a banana, cherries and a rainbow. There’s (possibly) not a shred of irony in her exuberant and joyful depiction. Karen Finley‘s irreverent still-lifes of bouquets in elaborate gilded frames branded with variations of “Fuck You”, turn a usual Hallmark epigraph upside down – true romance gone awry. The same is true for Joshua Abelow‘s text/image drawing “True Romance” – sinister undertones of goblins and predators lurk behind the artist’s simple graphite rendering of love’s quest.

In “Lucy in the Sky with Diamonds #3 (Stereo Mix)”, Erik den Breejen forges a direct link with the counterculture and hippy movements of the 1960’s, transmuting the lyrics of the iconic Beatles song into a richly hued, textual mosaic. Amidst gracefully modulating color harmonies and variations in scale, the words take on a hypnotic, mantra-like quality, projecting a sense of catharsis and tranquility grounded in the lyrics’ utopian imagery. Becky Brown zeros in on the power of repetition in “I want to squeeze you”, amplifying the urgency and intention of the namesake phrase with each recapitulation, resulting in a monad-like singularity of meaning within the canvas that parallels the often overwhelming nature of desire. In contrast, Sam Jablon‘s “Love” hinges on the rarefied expressive potential of a single word (referencing Robert Indiana’s seminal LOVE sculpture with a reverse E), creating a mirror of sorts for the viewer to confront their own understanding of love.

Other artists emphasize the slippery character of language, visible in the sly humor that underscores Alex Gingrow‘s and David Kramer‘s work. In “Barbie Wrecked the Fucking Convertible” and “I Used to Shave My Legs”, Gingrow superimposes short, clipped proclamations over faint backgrounds, uncomplicating the words’ deadpan directness. Juxtaposing pop-culture cues with glimpses into private dramas, the works call attention to the simultaneous division and overlap of the personal and mass culture, and exalt the seemingly inconsequential sparks and friction of interpersonal dynamics. David Kramer evokes the mythos of surfer and beach culture in “Beach Van”, pairing their essential signifiers with text reminiscent of advertising copy. Interweaving consumerism and sexual desire (along with suggestive, innuendo-laden text), “Beach Van” presents sexuality as leisure, a diversion from the “real world” and source of pleasure like any other product or subcultural trend.

With its similar exaggeration of 60’s cultural tropes, Walter Robinson‘s “Love Doctor” also seems to descend from some pop culture ID. The artist has long used source materials such as magazine advertisements and the cover illustrations of romance novels, and drawing from the latter, “Love Doctor” channels a dramatic, storybook vision of love. Shifting between emotional intensity and a sort of parody of the format, Robinson complicates the viewer’s reading of the image and its connotations. Hope Gangloff and Aaron Johnson veer into the domestic realm, depicting the daily ups-and-downs of relationships and cohabitation. Gangloff’s “Untitled” is a highly relatable image of a couple watching television, and in its portrayal of shared simple pleasures, reminds us of the solace and pure comfort of love.

In a darker, more narrative vein, the legendary Louise Bourgeois presents two giant, red vampirish breasts, at once either dominating or being suckled for blood, rather than milk, by a prone male figure: a variation of vagina dentata, depicting the more morbid side of co-dependent relationships. Likewise for David Humphrey‘s surreal rendering of a young couple engaging in a naked standing “quickie”, perhaps between classes or outside the high school prom. A sense of secrecy and shallow desperation permeates the scene: casual sex on the sly. The sexual decadence and excess of Lauren Nickou‘s paintings of orgies reflect similar deviant tendencies, though they are somewhat obfuscated by fleeting glimpses of tenderness.

Contributions by Michael Scoggins, Cary Leibowitz, and Rebecca Goyette pivot around the notion of abjection (literally meaning the “state of being cast off”), expressing psychological repression, vulnerability, and raw emotional honesty. Taking the shape of a torn journal entry, Scoggin’s “Heart of Gold” uses the diaristic format to blur the edges of art and autobiography, while Leibowitz’s crude, profanity-laced watercolors exploit our knee-jerk reactions to explicit sexuality. Goyette also deals with the imaging of sexuality, and her recurring “lobsterwoman” character references aspects of fantasy and fetishism.

Another painting, small but replete with social commentary and irony is “Early Childhood Development Center” by Jules de Balincourt. Unlike his usual sweeping Utopic scenes of millenials gathering at Burning Man concerts, Coachella, or Carribean surf settings which we might expect for this show, this tiny vista is tight, repressed, and vaguely ominous. A sense of isolation, melancholy, and dread fills the frame. Love has been replaced by loss, as well as numbness, regret, and bitterness. A “fuck everyone and all their girlfriends and boyfriends” kind of vibe. If the painting seems oddly familiar to some viewers, it is: it has appeared in various other F+V incarnations, but still packs a punch. Elizabeth Huey‘s environments manifest quite a different set of qualities; open ended, unpredictable, and charged with dynamism and possibility, they are spaces where individuals are free to explore mental states beyond conformity and social norms.

Atmospheric environments and landscape imagery are central in a variety of other works in the exhibition, such as the luminous paintings of Kathy Bradford, Jennifer Coates and JJ Manford. In “Summer Fun at F+V”, Bradford’s figures seem to hover in an area suggestive of both water and endless space, their simplified forms blending with their surroundings in a physical analogy of the dissolution of ego native to love and deep human connection. As with many of the works in “Summer of Love”, Bradford evades linear meaning, instead inviting the viewer to interpret her forms in light of their own perspective and experience. In “Green Dogs”, Deborah Brown‘s sprightly description of human and animal forms insinuates their internal energy, evoking a feeling of harmony and rhythm that links the reclining female figure with the dogs and landscape elements.

Heavily informed by early Modernist painters such as Matisse, Kandinsky, and Klee (particularly their integration of the teachings of mystic writers), Coates’ work offers a visionary take on the natural world, investigating its resonances with perception and the human experience. In “Visitation”, trees and branches are stylized into kaleidoscopic motifs, which, paired with an otherworldly palette, convey the sense of a transcendental phenomenon. Ryan Schneider‘s work conflates human, animal, and abstract signifiers, connoting a psychedelic experience wherein the natural world exerts a profound psychological impact.

The biomorphic imagery of Aime Cunat‘s “Calistoga” channels correspondences between the architecture of Calistoga, CA, and organic forms, synthesizing the two in a surreal paradise that questions the solidity of reality. Like Coates, Cunat’s use of modern and iridescent pigments further complicates the balance of the organic and inorganic in her work, and reveals ways in which technological and chemical advances can enhance our perception of nature.

Robin Kang further traces technological avenues in her abstract tapestries, fusing hand embroidery and computer processing to create compositions that recall microchips, motherboards, and other ephemera of the digital age. “Radial Star” treads the line between the traditions of Southwestern weaving and our contemporary digital paradigm, suggesting a “third path” that is neither Luddite or dismissive of the past. Jamie Powell also prioritizes object and process in her piece “Tough Puff,” reimagining dress-like material in a framework that gives room for the allusive qualities of their feminine forms to develop. Lastly, Peter Hutchinson gives us “Amaryllis Mon Amour,” a simple declaration of one man’s love for nature. At the end of the day, “Summer of Love”, through all its various approaches and permutations, delivers a heartfelt, reassuring message in the face of challenging times.

A full-color catalog will accompany the exhibition.