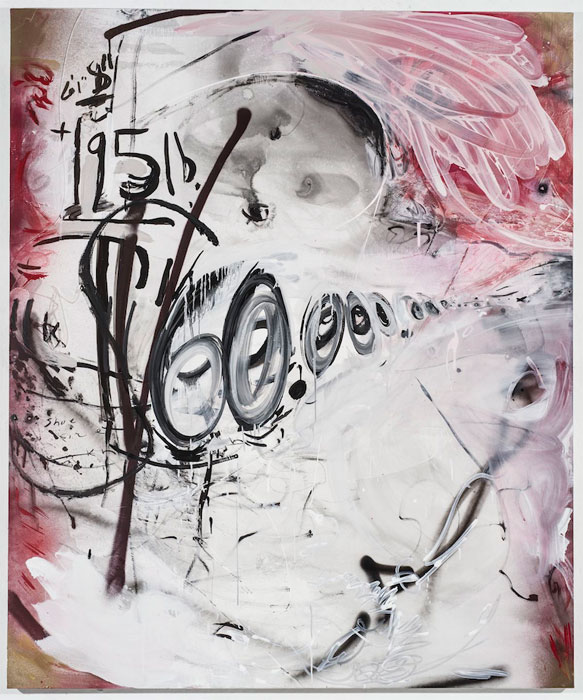 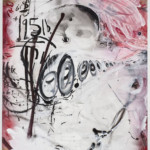 Suzanne McClelland’s paintings are rife with apparent contradictions. On the same canvas, the artist displays a powerful sense of restraint, a gift for spareness, as well as an indulgence in moments of dense visual texture and resplendence. Similarly, the works rely on both the artist’s intuition for abstraction and her deep, often research-based investigations of her subject matter. The paintings’ seemingly conflicting characteristics do not mystify or dilute McClelland’s project: on the contrary, these frictions are the central generative elements of her work, animating her knotty conceptual content.

Text is a cohering element in McClelland’s work, appearing in all her paintings – albeit with varying degrees of legibility. The artist treats handwriting as a mode of drawing, an alternate means to make a picture, frequently using written words and numbers to depict an invisible subject – an emotion, a missing person, an individual’s net worth. In this sense, her paintings are neither abstract nor pictorial: they explore representation itself, merging language and image, the page and picture plane, to interrogate the veracity of either expressive medium.

This show’s subjects are the world’s highest-paid actors and rap musicians. These paintings investigate the semantic gap between a signifier and its referent – in this case, the bodily measurements and incomes of famous, wealthy men. In representing men’s bodies with numbers, McClelland subjects her “sitters” to simultaneous processes of objectification and corporeal abstraction. The artist emphasizes and inhabits the gulf between numbers and the people they supposedly represent and, in doing so, calls into question societal modes of representing and evaluating an individual’s value.

Since the mid-1980s, Suzanne McClelland has shown her work extensively in the United States and abroad. On 05 March, “Just Left Feel Right”, a survey of McClelland’s work curated by Amy Smith-Stewart, will open at the Aldrich Museum in Ridgefield, Connecticut, with a catalog featuring the essay “Third Party” by Smith-Stewart. Past museum solos include The Whitney Museum of American Art in New York and the Weatherspoon Art Museum in North Carolina. This past fall, a monograph on McClelland was published, entitled “36-24-36” and featuring a text by Thierry de Duve, and distributed by DAP. This coming year, she will be included in a show at the Wexner Foundation in New York curated by Michael Goodson. She will also be the subject of a profile in “Modern Painters” by Juliette Helmke. Her work is included in many public collections, among them The Museum of Modern Art, The Metropolitan Museum of Art and The Brooklyn Museum in New York City; The Yale University Art Gallery, the Albertina in Vienna and the Walker Art Center. McClelland participated in the 1993 and 2014 Whitney Biennials and was included in The New Museum’s “NYC 1993: Experimental Jet Set, Trash and No Star”.