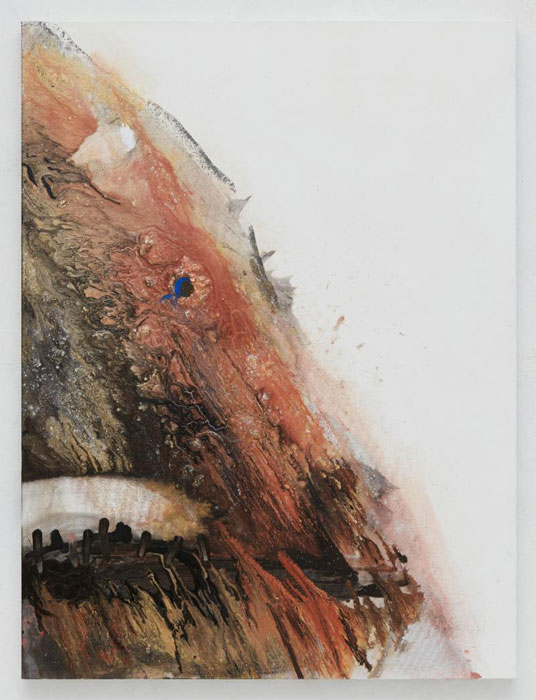 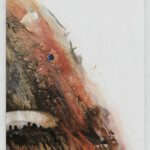 Suzanne McClelland has begun work on a body of 26 paintings, one for each letter of the latin alphabet. The intention of this project is to make paintings that engage the idea of the image while avoiding representation or, simply put, to render the unutterable. Their vertical format suggests portraiture, not landscape, though the forms are neither human nor animal but viscous spills that appear cognizant. These deltas of paint record the pouring, staining, and hardening of fugitive pigments, surface and gravity obliging mutable and formless materials to change state and arrest into image. Shape and composition appear closer to effluent deposits than painterly compositions, and the artist’s minimal interventions and mark-making in this ground further disrupt our notions of agency and control.

Systems of communication are at the center of McClelland’s work, exploring the abstraction inherent in visual communication and the limitations and liabilities of language and painting. The characters of the latin alphabet are among the most instantly recognizable symbols we encounter every day, though their graphic existence verges on invisibility, a trait encoded in their role as a stand-in; speech, broken down into sounds, represented by glyphs. In muting these elemental units of language, McClelland liberates them from an existential bind, severing their function from a point of origin that tethers them to what can be articulated and vocalized. The paintings in McClelland’s “Mute” series deconstruct symbols and structures into the synaptical and chemical operations of an instinctual response, and manifest an alternate alphabet for expressing things that cannot be described or spoken, yet demand to be heard.

Since the mid-1980s, Suzanne McClelland has shown her work extensively in the United States and abroad. Museum solos include those at the Aldrich Museum of Contemporary Art in Ridgefield, CT, the Weatherspoon Art Museum in North Carolina and the Whitney Museum of American Art in New York. Her work is included in numerous public collections, among them The Museum of Modern Art, The Metropolitan Museum of Art and The Brooklyn Museum in New York City, the Yale University Art Gallery, the Albertina in Vienna and the Walker Art Center. McClelland participated in the 1993 and 2014 Whitney Biennials and was included in the New Museum’s NYC 1993: Experimental Jet Set, Trash and No Star.