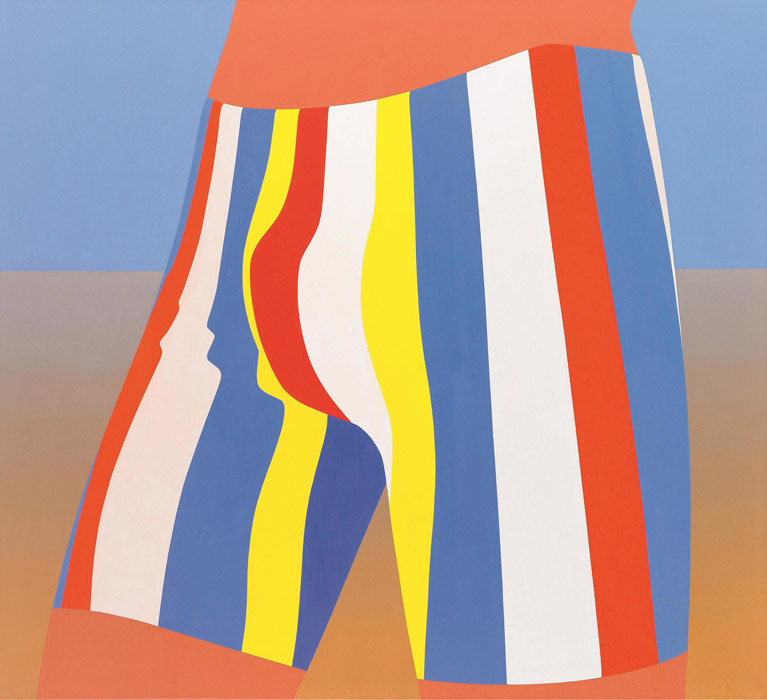 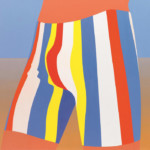 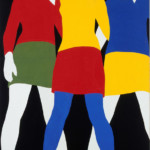 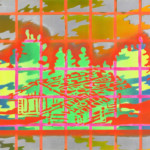 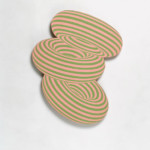 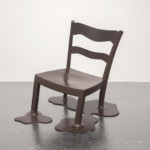 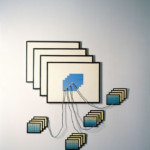 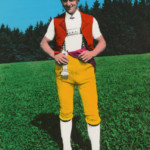 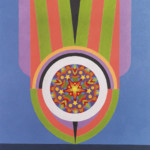 Assembling some 270 paintings, sculptures, collages, photographs and objects by 51 artists from all parts of the country, the exhibition “Swiss Pop Art” presents for the first time a comprehensive survey of Pop Art in Switzerland in the period from 1962 until 1972.

Pop Art is regarded as one of the most important international movements of the post-war era. After first emerging in Great Britain and the USA, it gained prevalence around the globe in the 1960s. Pop Art was also of central importance for Swiss artists in the period from 1962 until 1972. Impressed with its provoking imagery and novel pictorial techniques, they created works that, while following the international models, still developed an artistic language of their own. In the process, a specific version of Pop Art emerges, which may be considered typically Swiss.

These specifically Swiss forms and tendencies of Pop Art in the German, Italian and French-speaking parts of Switzerland are the subject of a large-scale exhibition at the Aargauer Kunsthaus which also looks beyond the visual arts to the intersections with public art, photography, design and music. “Swiss Pop Art” assembles some 270 paintings, works on paper, sculptures, films and objects by artists such as Fernando Bordoni, Samuel Buri, Niki de Saint Phalle, Emilienne Farny, Franz Gertsch, Rosina Kuhn, Urs Lüthi, Markus Raetz and Peter Stämpfli. These works are from the collections of the artists, from public and private collections and from the holdings of the Aargauer Kunsthaus. Many of the works have rarely been shown in exhibitions before and allow visitors to make many a new discovery in the exhibition. In addition, selected installations, such as Peter Stämpfli’s “M301” (1970), were reconstructed especially for the exhibition.

Pop Art – Swiss Made
With the eruption of Pop Art in the Helvetian art landscape in the early 1960s new thematic and reference fields suddenly opened up. Entirely new forms of figuration took hold, which with their trivial subjects, their boldly simplifying style and vibrant colours decidedly broke away from the then prevalent abstract art. Pop Art was the expression of the unspent lifestyle of uniformly young artists. The most important works of Swiss Pop Art date from the period 1962-1972. Marc Egger’s 1962 “Carscape” was one of the first works clearly related to Pop Art. During an eventful time of social and political change the relatively carefree sense of life accompanying the establishment of Pop Art persisted for a full decade. By the time of the 1973 oil crisis at the latest, the boom came to an abrupt end, causing the fertile soil for a “Pop Art Way of Life” to quickly dry up in Switzerland as well.

Pop Art lasted for a relatively short period not just in the history of Swiss art. It also represents a kind of transitional phenomenon in the oeuvre of many artists, one that often coincides with their early work. Some artists fell into oblivion after their Pop period, while others gained great renown, albeit often with works in which they had already moved on from a distinct Pop language. Its episodic character in Swiss art notwithstanding, Pop Art was of seminal importance to many artists: for Peter Stämpfli, for instance, it was through the automobile as the epitome of American-style consumer culture that he arrived, in the 1960s, at his central motif, the tire imprint, which he would continue to pursue for decades to the point of complete abstraction. While almost an adolescent still, Urs Lüthi created a series of works in which he references, say, the product portfolio and the catchy logo of the AGIP oil company, as in his 1967 acrylic painting “Supercortemaggiore”. Looking back today, Lüthi says that dealing with banalities rather than with the lofty themes of art was the most formative aspect of Pop Art for him. Accordingly, his early, Pop Art-influenced works served as the foundation for his subsequent oeuvre with its typical blending of art and life. For Markus Raetz the radical simplification of subjects, as in his 1968 work “Goppenstein”, was a decisive impulse of Pop Art, which informs his work to this day. His novel materials as well as the vibrant colours were entirely “pop” and offered a deliberate counterpoint to the understanding of art which, at the time, was informed by the Zurich concrete artists. It is thus not a coincidence that the legacy of concrete art resonates in a variety of ways in Swiss Pop Art: colourful geometric shapes are combined with figurative motifs, as in the works of Alfred Auer, Fernando Bordoni and Ueli Berger. The latter also develops furniture together with his wife, Susi Berger-Wyss, such as the 1967 “Soft-Chair” and the 1970 “Wolkenlampe” (Cloud Lamp), which are among the most representative examples of Swiss Pop design.

The Pictorial Worlds of Pop Art
Pop Art introduced the pictorial worlds of everyday life into art – in Switzerland just as elsewhere. Mass culture (advertising, fashion, pop music) as well as current events are recurring themes in the exhibition. While Bendicht Fivian lends Lady Jane of the 1966 Rolling Stones hit a face (Lady Jane, 1968), Franz Gertsch reduces the legendary band to their contours in his early large-scale series “Rolling Stones” (1968). Women artists such as Emilienne Farny, Rosina Kuhn and Margrit Jäggli, on the other hand, focus on such themes as the new image of woman in the nexus of advertising, miniskirts and bikinis and women’s movement and sexual liberation, an image that needed to be reinvented. Space travel under the influence of the “mega-event” of the first moon landing found expression in various images of astronauts or so-called unidentified flying objects, as in the case of Carl Bucher’s “Landings”. Urs Dickershof’s “Frühlingsbombe” (Spring Bomb) shows that the decade of Pop combined opposites, such as the Vietnam War and the hippie movement.

A special aspect of Swiss Pop Art is the incorporation of folkloristic pictorial traditions, be it by drawing on typically Swiss imagery or by borrowing from local forms of folk art. Samuel Buri draws on the indigenous image of the Swiss chalet which he represents in a grid and ecstatic colour combinations, as in “Chalet psychédélique” (1967). Barbara Davatz, in turn, presents rural postcard images in excessive colours à la Warhol in her hand-coloured photo series “Souvenirs from Appenzell” (1968). Other concerns aside from typical Swiss landscape motifs are the advancing urbanisation, urban sprawl and the development of overbuilt nature, for example, in the works of Max Matter and Jean-Claude Schauenberg.

Pop Art Research from a Swiss Perspective
With the exhibition Swiss Pop Art the Aargauer Kunsthaus positions itself within an international discourse: a look at international developments in art reveals how relevant Pop Art is again today. This is evident by international exhibition projects on the subject, such as “The World Goes Pop” at Tate Modern (2015-2016); “International Pop” at the Walker Art Center in Minneapolis (2015) and “German Pop” at the Schirn Kunsthalle in Frankfurt (2014-2015). This is accompanied by a revaluation of Pop Art which interprets the movement not solely as a well-defined phenomenon dictated by England and the U.S. but, rather, as a decidedly international movement with distinct regional manifestations responding to existing traditions, local art as well as the cultural and political context. The timing of the exhibition is perfect also from the perspective of art historical research, as it offered the opportunity to conduct oral history interviews with the protagonists of the period and thereby obtain valuable information.

Resource and Event Space
The artist duo L/B, consisting of Sabina Lang and Daniel Baumann, have conceived a study and event space especially for the exhibition at the Aargauer Kunsthaus. Going beyond a classic reading room, it may be used by visitors interested in educating themselves and at the same time offers space for lectures and special events. It invites visitors to further inform themselves about artists through books, to immerse themselves in the events of the 1960s by means of old TV reports and to listen to matching music from the period from a Jukebox.

Sabina Lang (b. 1972) and Daniel Baumann (b. 1967) live in Burgdorf and have been working together since 1990. They have received multiple awards for their work, including the Cultural Prize of the City of Burgdorf (2010) and the Swiss Art Award from the Federal Office of Culture (2002, 1998).

An extensive publication in German, English and French will be published in conjunction with the opening of the exhibition. Scholarly texts offer a well-founded art historical analysis and evaluation of Pop Art from a Swiss perspective, which is illustrated with extensive pictorial and information material. Essays on the influence of Pop Art in the fields of design, public art, graphic art / typography and music make it possible to situate the subject across disciplines in a larger context. A text and image-based chronology sheds light on the politically and socially extremely eventful contemporary context of Pop Art and the artists’ biographies provide an overview of the artists included in the exhibition. This definitive work on Swiss Pop Art assembles texts by Yasmin Afschar, Karoliina Elmer, Bernadette Fülscher, Kornelia Imesch, Dora Imhof, Renate Menzi, Franz Müller, Samuel Mumenthaler, Astrid Näff, Philipp Stamm, Madeleine Schuppli, Katrin Weilenmann and others.