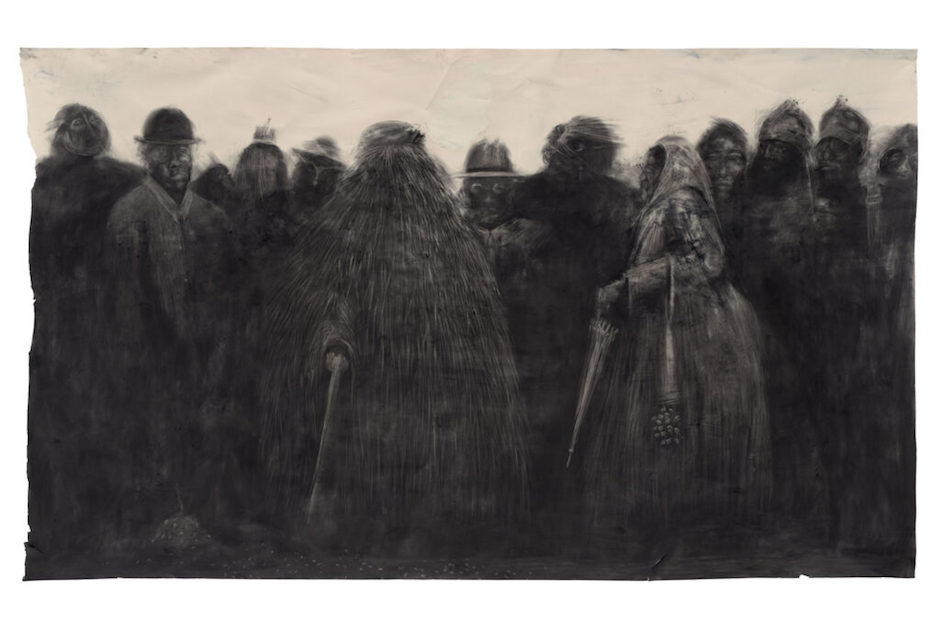 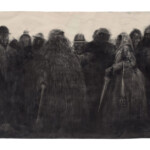 Rena Brantsen Gallery is pleased to present “Dust to Dust”, Sydney Cain’s inaugural exhibition with the gallery, organized to coincide with her show “Refutations” at the Museum of the African Diaspora, San Francisco, and her large-scale commissioned mural “Radio Imagination” which is on view as part of “Mothership: Voyage into Afrofuturism” at the Oakland Museum of California. A catalog will be published to accompany the gallery exhibition with an introductory essay by Angela N. Carroll.

The works which comprise this exhibition are Cain’s excavations into memory and liminal spaces. Their creation includes an intuitive sifting, rubbing, and erasing of black pigments and metals to reveal personal mythologies which exist beyond mainstream and colonial narratives in a process that is as much an investigation as a manifestation. The shadowy figures which populate Cain’s images, usually found in groups, are not “set” beings – their histories and messages are as intangible as their facial expressions. In communing with these enigmatic entities, Cain seems to be inviting them to exist in the present by reaching both backwards and forwards in time simultaneously to find them, until the very notion that existence is tethered to linear time becomes suspect.

Sydney Cain was born and raised in San Francisco. Their multimedia work is largely on paper using dye, graphite, powdered metals, and chalk as emblems of impermanence and transformation. She investigates remembrance, evolution, and spirituality from her perspective as a queer black woman. The encoded language of DNA is deciphered through the practice of drawing, contributing to the concept of collective Black mythos. Cain’s current work is founded on genealogical research alongside the effects of urban renewal/colonialism and threats against Black afterlives. Cain has exhibited throughout the Bay Area including at the Oakland Museum of California, the Museum of African Diaspora, SOMArts, Betti Ono, Ashara Ekundayo Gallery, the San Francisco Arts Commission, and the African American Arts and Culture Complex. Sydney Cain is a recipient of the 2021 Artadia Award, and MoAD’s 2019-20 Emerging Artists program. They live and work in San Francisco, CA.