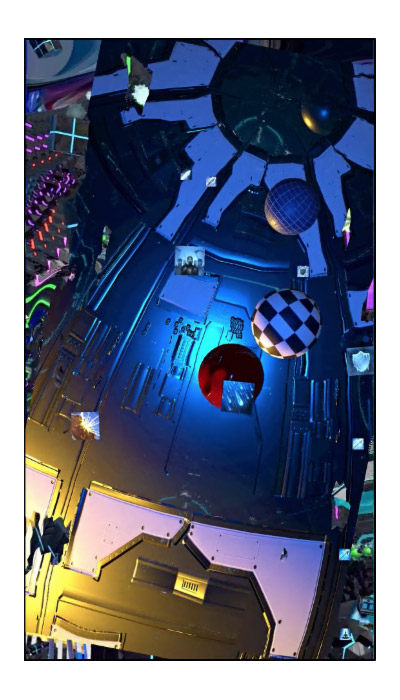 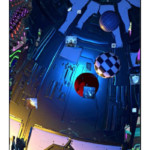 For this exhibition, Robak has created seven brand-new, single channel video works. Since his last exhibition in New York in 2015, the most significant development in the artist’s practice has been the shift from looped data to live-generated imagery. Each of these pieces runs off a dedicated, custom-built computer, and features a distinctive admixture of churning, visually dense imagery, layers of recognizable referent images and spatial settings, which intermittently dissolve into relative abstraction.

Each of the seven works in the show centers on a single color – red, orange, yellow, green, blue, purple and black. This practice of explicitly color-coding characteristics – dubbed “quantaspectra” by Robak, or quantification via the color spectrum – is common in the likes of video games, comic books and cartoons, works of fiction that require so-called “universe creation.” The artist treats the colors almost as mythic figures, the players in his own personal ontology. Some of their ascribed characteristics are familiar: the red work, for example, centers on violence and the infernal, and is laden with medieval weapons, devils and skeletons. Others, however, are more idiosyncratic: orange, here, is the color of corporate indoctrination, slick but artificial luxury.

The works, each of which is displayed on a 75-inch flat screen in portrait orientation, evince a totemic, almost mythological character, and render the darkened gallery chapel-like. The gravitas of this presentation, rather than seeming at odds with the videos’ unembarrassed CGI aesthetics and content, elevates the ghettoized visual vocabularies of video games to a soaring means of signification. Cartoon demons and robots become towering symbols for such formidable and familiar subjects as anxiety, creativity and self-reflection.

“Sunflower Seed”, Robak’s previous show, took place at Team’s Los Angeles outpost and presented several significant departures in the practice: not only were these pieces live-generating their imagery, and therefore durationally infinite, they largely eschewed the figurative content of previous bodies. The resultant exhibition was relatively restrained, devoid of the video game-inspired imagery that defined his earliest output. Here, the artist merges his representational and abstract modes of making. The works pulsate in and out of figuration, its recognizable images dissolving into their constituent pixels, pure color and form.

With this exhibition, Robak synthesizes two of his practice’s previously separate conceptual threads: the acknowledgement and exploration of digital space as a discrete, secondary reality, and the possibility of creating a temporally boundless artwork via programming. The works’ settings have real-world referents, but repeatedly break the rules that would govern those actual physical spaces; watching an apparently unending hallway, or a room collapse into itself, the viewer is confronted with the isolated fact of the medium, its elasticity and neoteric singularity. Because the pieces’ visual content is determined in real-time by the artist’s custom-written programs, they appear constantly in the process of constructing themselves. This profound ephemerality is poignant and thrilling, and unique to the artist’s modern medium.

This is Robak’s fifth solo show. Previous exhibitions have been rapturously received, including reviews in The New York Times, New York Magazine, The New Yorker, Art Observed, Modern Painters, Interview and Mousse. He was also the subject of a feature article in the November 2015 issue of Artforum. He has been featured extensively in group exhibitions at galleries and institutions both stateside and abroad, including Serpentine Galleries, London; the 12th Lyon Biennale; Palazzo delle Esponizioni, Rome; MoMA: PS1, New York; Kunsthalle Düsseldorf; Museum of Contemporary Art Tokyo; and Kunsthalle Rotterdam. His work is included in numerous public collections, including those of The Albright-Knox Art Gallery, Buffalo, NY; DESTE Foundation for Contemporary Art, Athens; Fondazione Sandretto re Rebaudengo, Turin; KRC Collection, Amsterdam; The Metropolitan Museum of Art, New York; Migros Museum, Zurich; The Museum of Modern Art, New York; and the Yuz Collection, Shanghai.