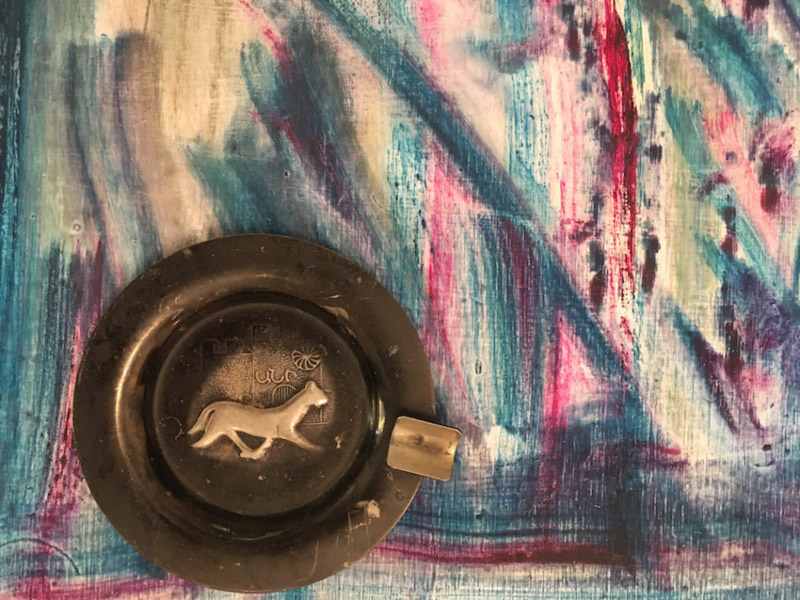 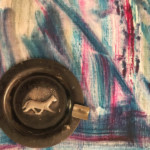 Team (gallery, inc.) is pleased to announce a show of new work by Japanese artist Tam Ochiai, entitled “Tarragon, Like a Cat’s Belly”.

For this show, Ochiai has produced a series of hybrid artworks, which feature aspects of both sculpture and painting. These pieces consist of painted two-dimensional panels, lain on their backs, with antique ashtrays embedded in, or affixed on, their surfaces. These so-called “ashtray sculptures” sport the visible evidence of their use, an accelerated patina. The artist intends the ashtrays for employment, and visitors to the gallery are invited to smoke in the space, dispensing of their ashes and cigarette butts on the artwork. The fact that the ashtrays are bought secondhand is significant: they are charged with the mystery of their previous existences, their past owners and users. They reflect Ochiai’s ongoing interest in the poetic possibilities of containers, brackets as placeholders for their implied contents. The artist considers the traces we leave, the seemingly miniscule marks we make, as metonymies for our lives at large.

The ashtray, in the past decade or so, has turned from a common functional object to a relative novelty, albeit a familiar one. As smokers are pushed outdoors – indoor smoking not merely shunned in polite society, but usually rendered illegal – these items become increasingly imbued with nostalgia, relics from a recently bygone past. Most of the ashtrays contained in these works are from the 1930’s and 40’s, collected by Ochiai via both the Internet and from antique shops across the world. By recontextualizing the found objects, attaching them to the surfaces of these delicately painted and irregularly shaped panels, the artist isolates and enhances their diverse and alluring formal characteristics, without erasing their original intended use or implied individual histories.

Several of the works on view provide a new iteration of one of Ochiai’s ongoing projects, which he debuted at Team Gallery in 2012 with the exhibition “Everyone Has Two Places”. These works operate on a deceptively forthright conceit: each piece displays the names of two cities, often the birth- and death-places of an historical figure, especially fellow artists, writers, musicians, actors, filmmakers. The titular “places” serve as bookends, which not only chart the movement of the body, but likewise index the volume of a life’s work. With this show, he introduces a complicating aspect to the body of work: the cities are represented by souvenir ashtrays – a work titled “Diane Arbus”, for example, features two “New York City” ashtrays. These mysterious sculptures function as tender tributes to their subjects, poignant reminders of the close connection between an artist’s work and life.

Tam Ochiai was born in Yokohama and lives and works in New York, while traveling frequently to Tokyo. Ochiai has been represented by Team Gallery (New York) and Tomio Koyama Gallery (Tokyo) since they both opened twenty years ago. He has also participated in both gallery and museum shows in London, Basel, Salzburg, Berlin, Milan, Amsterdam, México City, Copenhagen, Osaka, Dijon and Brussels.

This is Ochiai’s seventh solo show at Team.