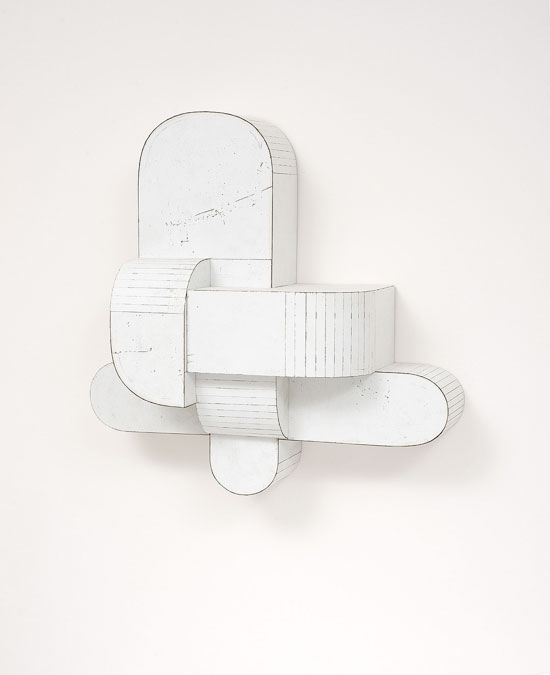 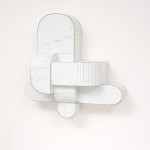 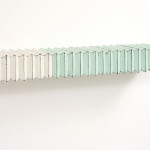 Margaret Thatcher Projects is excited to present “Industrial Park”, a series of new works by Ted Larsen in what will be his debut solo exhibition at the gallery. Larsen examines the history and moldable identity of discarded objects and materials through the creation of minimal sculptures.

Larsen’s interest in cultural and personal history plays a substantial role in his creative process. In using pre-painted and salvaged metals, the artist reexamines the idea of “ready-mades,” first introduced during the early 20th century, where ordinary objects were presented as art. The artist manipulates the materials, reassigning a new identity while recognizing its past life, drawing inspiration from Lee Ufan who once said, “The highest level of expression is not to create something from nothing, but rather to nudge something that already exists so that the world shows up more vividly.”

Larsen’s attention to changing identity is further manifested in the titling of the sculptures, such as “Kosher Ham”, “Serious Fun” and “Industrial Park”, where the paradoxical pairings fuse to become harmonious and bring into being a novel expression.

From the gradual sloping curves to the facets of multiple planes meeting at clean, precise angles, Larsen’s forms are pared down, allowing for an unadulterated viewing. He says, “The shapes come from all sorts of influences; industrial components, geometric abstraction, biomorphic form, and pure invention.” The works do not have symbolic implications and are not directly representational; rather Larsen provokes the viewer’s personal history, garnered from encounters throughout daily life, to inform the relationship with the sculptures.

Ted Larsen received a B.A. in General Studies Science from Northern Arizona University in 1986. Larsen’s work has been exhibited widely in museums in the US, including the New Mexico Museum of Art, The Albuquerque Museum, The Amarillo Museum of Art, The Spiva Center for the Arts and the Philadelphia Museum of Art, as well as in over eighty gallery exhibitions. He has received grants from the Surdna Foundation and the Pollock Krasner Foundation, and had residencies with the Edward F. Albee Foundation and Asilah Arts Festival in Morocco, where he was the selected to be the USA representative. His work is included in numerous private, public and corporate collections.