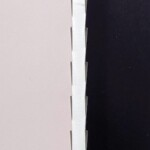 Marc Straus is proud to present its inaugural solo exhibition of London-based artist Tess Jaray (b. 1937, Austria, lives and works in London) with a selection of paintings from her recent “Aleppo” series.

Since the late 1950s Jaray, has been pursuing the ineffable purity of the physical world. Perhaps it was the rolling hills of her childhood countryside in Austria, or the encounter with the bisecting arches of the great Florentine architect, Filippo Brunelleschi (1377-1446) – or the inimitable work of Renaissance master, Piero Della Francesca, that profoundly moved the then young artist to embark on a life of artistic invention and mastery of line, pattern and color.

An architectural site has a lot to offer, and Jaray reads its story through the rich surface details, perspectival space and lambency. From them she draws a distilled geometric design, worked over and over to a state of universal beauty, at once familiar and original. This has become Jaray’s indelible aesthetic that has garnered acclaim and respect. She was made an Honorary Fellow of RIBA (Royal Institute for British Architects) in 1995 and a Royal Academician in 2010.

In the series “Aleppo”, Jaray is searching for light in the darkness. In the late 1990s, Jaray visited the city of Aleppo in Syria. She soaked it in, making notes of the majestic mosques, ancient stones with their contrasting colors, but it was not until 2016, when the extremist ISIL regime leveled the ancient city and all its architectural heritage within minutes in front of a paralyzed world audience, that Jaray was compelled to develop a new body of work.

“Aleppo”, inspired by the arches Jaray saw during her visit to the mosques of Aleppo, is a series of wall-based works, each consisting of two or more panels, where the meeting edges are perfectly laser-cut in a zig-zag shape and slightly distanced from one another. The panels are softly painted with muted hues each of equal height but with varying widths and opposing colors to create a riveting tension.

What can we take from Jaray’s “Aleppo” paintings? Are we to read these fissures as belligerent factions, tearing into the peace and purity of the land? Does the zigzag connote violence, splintering pain of loss, not only of innocent lives but civilization’s great treasures? Or are we to acknowledge that because of the confluence of diverse milieus, the convergence of dissenting ideas, the bonds between humans, that innovation and progress are sprung from the sum of its parts?

Tess Jaray RA, born in Vienna, is a British painter and printmaker. She studied at St Martin’s School of Art (1954 – 1957) and the Slade School of Art (1957 – 1960). Between 1985 and 2000 Jaray devoted much of her time to working on public commissions, applying her understanding of architectural space and pattern to large-scale projects in public spaces. Major public commissions include a terrazzo pattern design for London Victoria train station (1986); Centenary Square, Birmingham (1988-92); Wakefield Cathedral Precinct (1989-92); Jubilee Square at Leeds General Infirmary (1995-2008); and the forecourt for the new British Embassy in Moscow (1999-2001). Her work is included in numerous public collections, among them The Tate C, London; The Fogg Art Museum, Cambridge, MA; Sundsvall Museum, Sweden; and The Victoria and Albert Museum, London.

Jaray taught at The Slade School of Fine Art, UCL from 1968 until 1999. She was made an Honorary Fellow of RIBA (Royal Institute for British Architects) in 1995 and a Royal Academician in 2010. Having written extensively throughout her career, she published a book of her collected writings, “Painting: Mysteries and Confessions” in 2010. She currently lives and works in London where she also exhibits with Karsten Schubert Gallery.