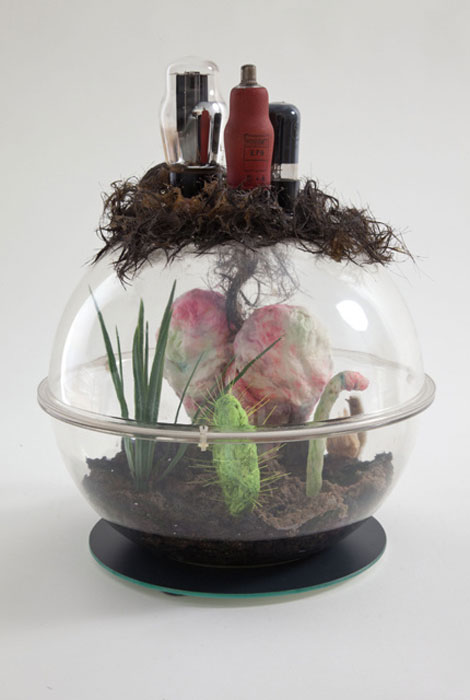 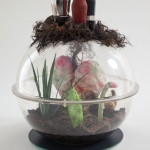 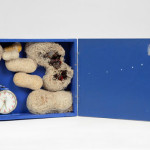 ‘In Kudo’s sculptures and assemblages […] there was a prevailing obsession with the theme of impotence linked to nuclear attack, a penchant for grotesque renderings of the body, cut into pieces or dissolving into puddles of goo, and a science-fictional dystopian picturing of the body as part machine… Kudo’s works looked less like sculpture than like movie props from lurid science fiction films […] I admired them greatly.’

This Autumn, Hauser & Wirth London will host an exhibition of works by Tetsumi Kudo (1935 – 1990) mounted in conjunction with Andrea Rosen Gallery. The installation was conceived with Olivier Renaud Clément. The exhibition presents a selection of work dating from the first ten years that Kudo spent in Paris (1963 – 1972). The seminal, room-size installation ‘Garden of the Metamorphosis in the Space Capsule’ (1968) forms the exhibition’s focal point and is shown alongside examples from his cube and dome series.

Developed in the context of post-war Japan and France, Kudo’s practice, which encompasses sculpture, installation and performance-based work, is dominated by a sense of disillusionment with the modern world – its blind faith in progress, technological advancement, and humanist ideals. His oeuvre transcends formal categorisation yet his work was consistently universal in its language.

A key figure of Tokyo’s Anti-Art Movement in the late 1950s, Kudo’s performative paintings and installations marked the beginning of his preoccupation with the impact of nuclear catastrophe and the excess of consumer society associated with the post-war economic boom. Relocating to Paris in 1962, Kudo gained recognition for his Happenings, but this exposure to the European intellectual scene also intensified his aversion to the modern agenda. This manifested in the biomorphic sculptures and assemblages that Kudo produced from 1963, in which he sought to expose the limitations of the modernist and humanist values that defined the post-war era.

In his cube series, small boxes contain decaying cocoons and shells revealing half-living forms – often replica limbs, detached phalli or papier-mâché organs – that merge with man-made items. These sculptures were intended as a comment on the individualistic outlook and eager adoption of mass-production which he found to be prevalent in Europe. The mutations are unnatural and impotent – a product of a post-apocalyptic world in which the synthentic triumphs over nature. The cube exteriors are painted as die, a nod to the idea that it is the random forces beyond our control that dictate life, rather than individual agency as western philosophy teaches.

‘Garden of the Metamorphosis in the Space Capsule’ is a die enlarged to over 3.5 square metres, with a small circular door allowing the viewer to climb into the dark interior lit with UV light. The elements within fluoresce in black light: molten cotton skin, penises and silhouettes of body parts litter the floor beneath giant artificial flower stems and a lurid green sign reads ‘for nostalgic purpose’.

Kudo’s dome works appear as futuristic terrariums: perspex spheres fed by circuit boards or batteries house artificial plant life, soil, and radioactive detritus. His use of acrid greens and yellows suggest a highly polluted environment. What is being cultivated in these mini eco-systems is a grotesque fusion of the biological and mechanical. That it is decomposing is illustrative of Kudo’s feeling that with the pollution of nature comes the decomposition of humanity.

Whilst Kudo’s presence in North America and Europe was marginal for many years, his influence on subsequent generations of artists has been profound and far-reaching. The simultaneously political, yet highly aesthetic, characteristic of his sculptural work is at the centre of the contemporary oeuvre. Allan Kaprow included photographs of Kudo’s performances in his 1965 compendium ‘Assemblages, Environments & Happenings’, images that would go on to inform Mike Kelley’s practice. Paul McCarthy also cited Kudo as a significant influence in his autobiography ‘Low Life Slow Life’ (2010).

A publication produced by Hauser & Wirth will be released on the occasion of the exhibition.

Tetsumi Kudo was born in 1935 in Osaka, Japan, and spent a large portion of his youth in the town of Okayama, neighbour of Hiroshima. He graduated from the Tokyo National University of Fine Arts in 1958. In 1957, he began exhibiting his work at the Salon of Independents, Yomiuri and had his first solo exhibition at the Galerie Blanche, Tokyo. He was awarded the Grand Prize and a travel grant to Paris through his participation in the 1962 Second International Young Artists Exhibition in Tokyo. He subsequently spent 25 years in Paris from 1962 to 1987 before returning to Japan. He died in Tokyo in 1990.