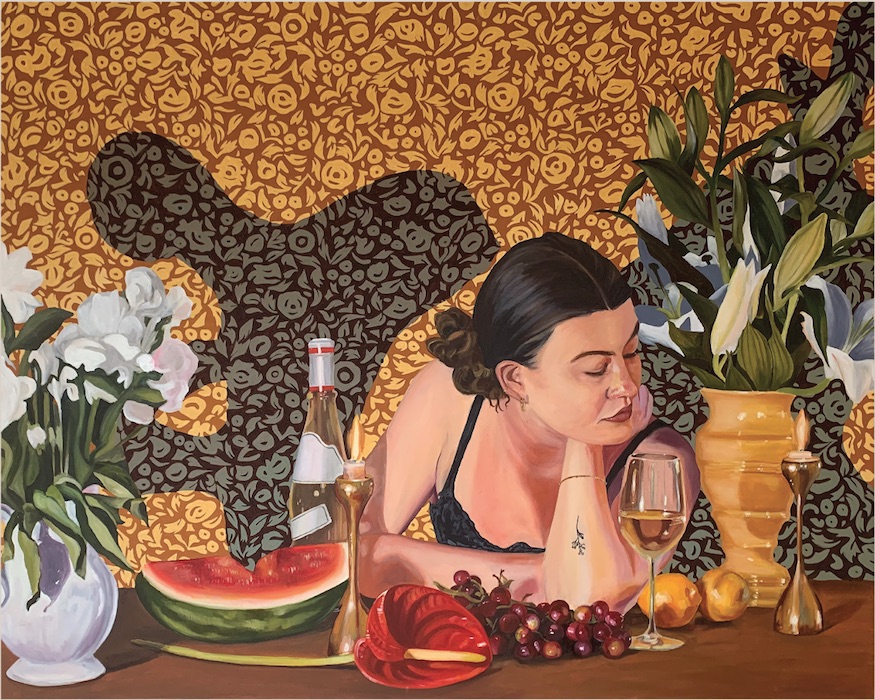 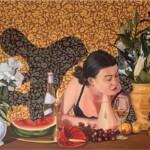 Freight + Volume is thrilled to announce “Unfolding”, an exhibition of intimate, psychologically probing portraits by Chicago based artist, Thérèse Mulgrew. Depicting her subjects in various states of undress and against a restrained floral backdrop, Mulgrew amplifies aspects of vulnerability while exploring the complexity of their inner-being through modulations of body language, pose, and the allusive still-life compositions that appear throughout the works in the series. Despite a deep familiarity with her subjects, who are often drawn from family and close friends, the artist uses painting as a vehicle to mine new understandings, or in her own words, a “completely new lens on their identities and emotional complexities, as if I was meeting them for the first time”. This balance of empathy and observation underpins Mulgrew’s approach to portraiture, and the title of the exhibition reflects the “sort of literal and metaphorical exposure” of her subjects she seeks to project, as well as the reciprocal evolution of her perspective of them over the course of depiction.

Choosing predominantly female subjects in a direct effort to confront societal anxiety surrounding female sexuality (save for “Logan and Dillon”, a double portrait of a male couple), Mulgrew carefully crops and poses her subjects, accenting faces, hands, and other loci of physical expression. In “Leah”, “Regina”, and “Keara”, the individual subjects gaze directly at the viewer; painted nude, or in the case of Leah, a state of undress, Mulgrew presents an aura of vulnerability removed from ideas of shame or modesty, instead suffused with self-confidence and inner strength. In “Bridget and Amanda”, the women are shown in profile, with their gazes averted; in the former, the subject stares enigmatically at a bundle of grapes, while in the latter, she looks upward, as if beckoned by an entity outside the bounds of the canvas.

The presence of large, dark shadows behind her subjects represent a sort of shadow self, a visual analogy for the individual’s “past and pain.” In “Amanda”, the shadows appear to take on their own forms, manifesting a parallel, alternate narrative. Conversely, the still life compositions and various accoutrements that dot “Unfolding” recall the present, and testify specifically, in Mulgrew’s words, what is “beautiful and pleasurable in the moment” and helps “get us through.” Compressing past and present into multi-layered narratives that complement the complexity of her subjects, Mulgrew’s approach is far removed from traditional portraiture, presenting her subjects as mutable beings in the ebb-and-flow of life rather than in stasis.

Thérèse Mulgrew grew up on a farm outside of Dubuque, Iowa. Influenced by her mother’s surreal oil paintings and her grandmother’s impressionist still lifes, she began to cultivate her own style which focuses mainly on portraying portraits and still life in oil paint. She took a variety of studio art classes at the University of Iowa, where she graduated as an English literature major. Immediately after, she moved to NYC where she studied at The Art Students League and New York Studio School of Painting, Drawing, and Sculpture. She currently resides in Chicago, IL.