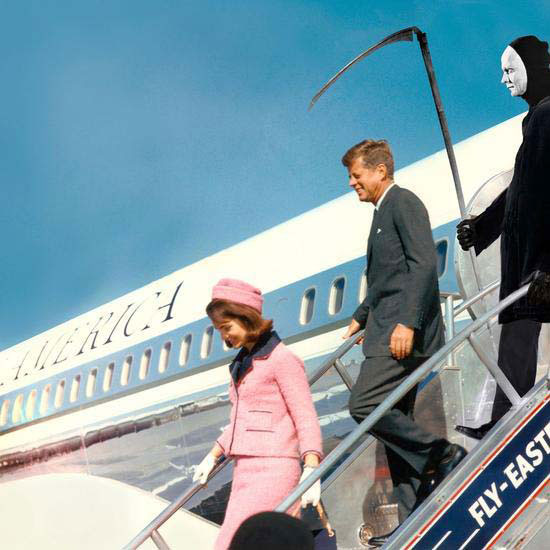 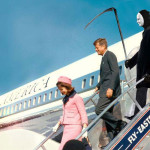 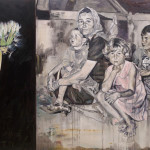 Dawoud Bey, Hung Liu, and John Waters address events from America’s history. Bey’s portraits from “The Birmingham Project” mark the occasion the fiftieth anniversary of the 1963 bombing of the 16th Street Baptist Church. Hung Liu contemporizes Russell Lee’s FSA image of a migrant family, and John Waters, ever one to revel in the ride from the sacred to the profane, corrupts stock images of the Kennedys as they deplane Air Force One in Dallas, and an iconic image of a segregated drinking fountain.

Rupert Garcia and Lava Thomas respond to unconscionable events and circumstance with a beauty that both abates and enhances the reference. Thomas addresses the recent Charleston shooting using a silent chorus of black tambourines; Rupert Garcia’s politically charged silkscreens from the late sixties and early seventies use intense color and pop culture imagery to decry social and racial injustice.

Through photography, performance, and painting, Tameka Norris claims the right to her body and image as she explores issues of race, gender, and politics. Drawing on her experiences, Norris assumes a range of identities: a black woman, a sexy woman, an educated elite, a hip hop star, and an artist with roots in the deep American South.

Doug Hall‘s “Neighborhood Watch” considers advances in camera technologies as tools of surveillance, demonstrating the anxiety that accompanies these innovations. Using a central image taken from a bird’s eye view, Hall extracts and enlarges details exposing people at work or children at play, unaware of being caught on camera. Similarly anxiety invoking, Henry Wessel‘s photographs reveal hidden domestic life, as with the ironically titled “Pink Cup”, a black and white image of a cup balanced precariously on a countertop.

Vik Muniz and Chip Lord pay homage to American car culture and comment on the automobile as a manifestation of financial success and the promise of the open road. Vik Muniz, cutting and collaging personal, vintage, black and white photographs and their inscriptions to create “Album: New Car”, 2014, presents an image that recalls all our family albums – a man proudly posing in front of his house with his foot on the fender. Chip Lord has partnered with Hayden Pedigo, a 21 year old musician and native of Amarillo, TX, to produce a single channel time based video, “Greetings from Amarillo”.