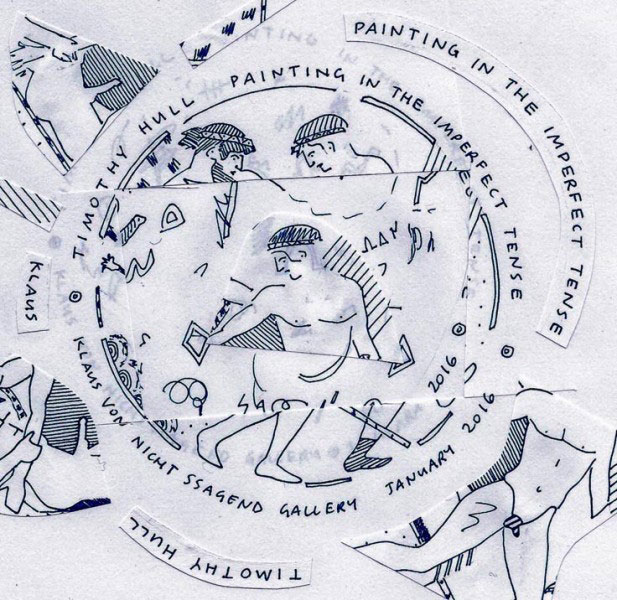 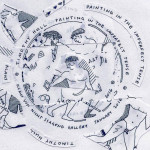 Painting in the Imperfect Tense. Two parts of a whole converge upon a single plane. Not like the Indian Ocean meeting the Atlantic at the Cape of Good Hope but more like a river into an estuary. There is no high drama where there is a building up of surface. I often think of a wall. The wall from antiquity – a lime, water, sand and plaster edifice with time as the willful yet careless participant. The wall is a minor character in a Sophoclean tragedy. Pozzolanic volcanic ash with limestone and what else?

When the writing is on the wall, the layered chorus becomes a two dimensional Dithyramb. The wall revealed what we know of Roman perspective, at one time inconceivable and lost. But the wall tells us that nothing is lost. It lets us in on the secrets of antiquity in ways we can scarcely imagine.

It’s strange when people say “if only these walls could speak” because they do! They just speak a language to which the modern ear is not attuned. It’s not just the language of painting but the language of surface and two dimensional plane that if allowed, opens into the fourth dimension, that of time/space. In the Jungian sense, language and wall surface, especially walls with words or glyphs inscribed upon them, can be understood as part of the universal consciousness that expands beyond the temporal feeling of the present moment. In that sense, this morning is just as over as the Peloponnesian war.

Suppose we felt the way the Ancient Greeks did? Burn some Frankincense, some Labdanum. Sit quietly in a room with a mottled stone floor. Fill a ceramic krater with 3/4 wine and 1/4 water. Try to place yourself out of time, to transcend this consciousness… then breathe deep and inhale the furtive, perishable fragrance of the past. Where does it take you?

Painting in the imperfect tense is a description of people, places, feelings and incidence of the past untethered to one specific moment or point but implying continuity.

Klaus von Nichtssagend Gallery presents Timothy Hull’s first solo show with the gallery since his New York debut in 2006, The “Struggle of the Magicians”. The show will consist of a new series of oil paintings installed in the annex gallery scented by frankincense and labdanum.