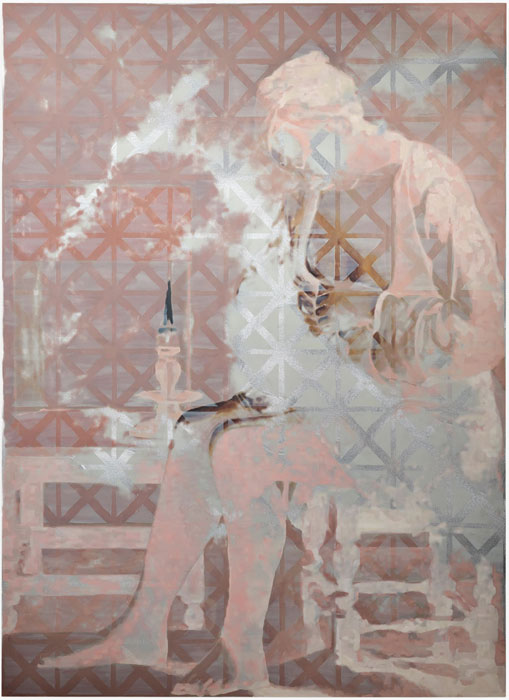 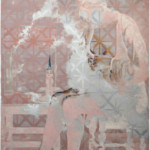 Simon Lee Gallery is pleased to present “Your Mother”, an exhibition of new paintings by London-based artist Toby Ziegler. This is his second solo exhibition with the gallery in Hong Kong.

A new body of work takes as its source two paintings by the seventeenth century French painter Georges de la Tour. “Magdalene with the Smoking Flame”, and “The Flea Catcher”, both painted between 1630 and 1640, offer mirrored compositions of a seated female figure in contemplative chiaroscuro. Working from this axis Ziegler develops an anatomical and figurative lexicon. The largest paintings of the group imagine the meeting of the two compositions, as if the sacred and the profane subjects were to meet in a single pictorial space. Other works re-frame each individual figure, or suggest intimate cropped details, just visible through a lattice of geometric pattern. For the first time, Ziegler’s painting practice arcs back to his sculptural work, a fragmentation and re-assembling of body parts in which medium and subject intertwine and coalesce.

As with earlier series, each painting begins as a digitally rendered image, its composition and content manipulated from a low-resolution jpeg of the source image. This visual information is then translated into oil on an aluminium surface, only to be disrupted once the paint is dry, with an orbital sander rubbed into its surface to reveal the metal beneath. The slow, delicate process of figurative painting is held in stark contrast to the disruptive rapidity of this erasure. The overlaid grid or geometric pattern, a nod towards abstract modernism, further obliterates the picture plane. The formal composition is on the brink of collapse.