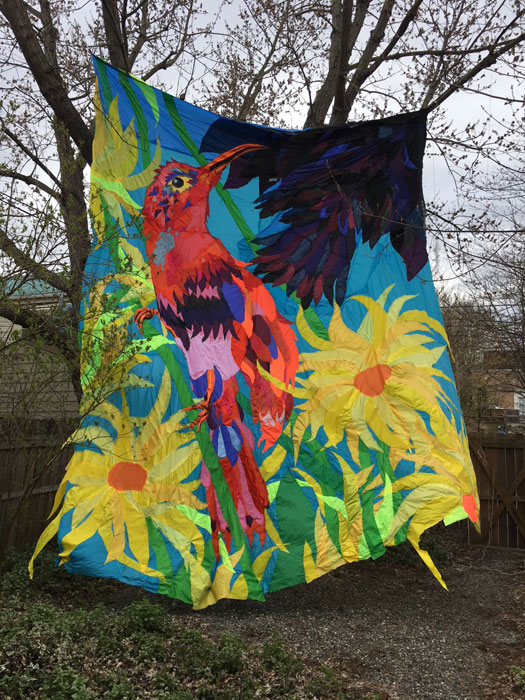 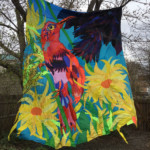 Jeff Bailey Gallery is pleased to present new fabric works by Todd Knopke, installed in the gallery’s garden and on the building’s facade. This is his first outdoor installation.

“Crippler” (240 x 192 inches) hangs in the garden, suspended from trees. A giant red bird gives us its gaze while hovering above large yellow flowers, petals dangling from the edge. The tail of another bird seems to dart off in flight.

“Field” (144 x 72 inches) hangs from the front of building. Yellow and green leaves reach for a full glittering moon.

Similar to quilts, the works are stitched together from varying pieces of material. Hanging out of doors, they are free to move and change shape, animated by the wind. The shift in scale is startling, but not unlike what we may experience in nature: even the flicker of a bird’s wing or the surprise of a flower’s bloom can alter our sense or perception.

Todd Knopke (born 1973, Los Angeles, CA) had his first solo exhibition with the gallery in 2015. He has had other solo exhibitions in New York at Feature, Inc. and Derek Eller Gallery. His work has been included in many group exhibitions, including Grimm Gallery, Amsterdam and Sikkema Jenkins, New York. In 2014 two large-scale site-specific installations were exhibited at the Frances Lehman Loeb Art Center at Vassar College, Poughkeepsie. Knopke received his BFA in 1994 from Virginia Commonwealth University, Richmond and his MFA in 1998 from Yale University, New Haven. He lives and works in Brooklyn.