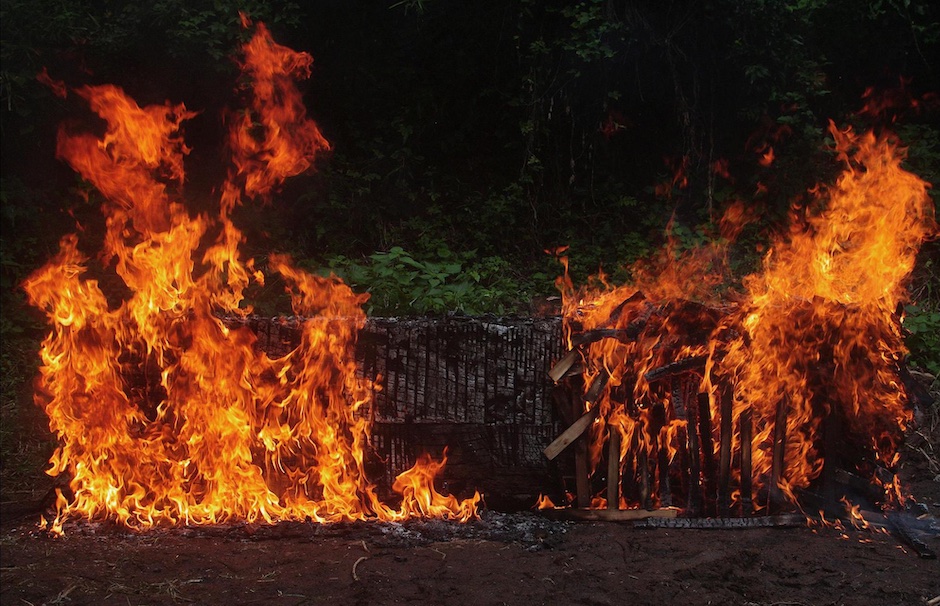 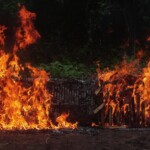 The sculptures and installations of Toshikatsu Endo (b. 1950), made by using materials such as iron, wood, fire, water, and ‘(air)’ have fascinated viewers with their overwhelming sense of materiality. As the artist’s first solo exhibition at SCAI The Bathhouse in seven years, this show presents an imposing space incorporating sculptures of wood and mirrors, along with two-dimensional works.

This exhibition centers around a three-dimensional object in the shape of a charred black coffin and, facing it, a hollow body of lead mounted on the wall. Endo’s process of creation often involves burning things, and this coffin-shaped work “Void – Mirror Coffin I” was completed by being burned.

The materials listed for this work are ‘wood, mirrors, (fire),’ or perhaps ‘wood, mirror, (fire),’ but the only thing visible is a black coffin, with no mirrors in sight. The mirrors (or mirror) which one would expect to be used somewhere in the work, are only indicated in a limited way, appearing only in the title and list of materials, with no explanation as to how they are actually used or what part of the work they make up. It’s all left up to the viewer’s imagination.

The entirety of the mirrors’ manifestation as mirrors occurs only when they are placed in, and exist within, our imagination. The artist is hinting that mirrors in the real world are nothing more than objects.

One gets the feeling that the work could be posing questions about our current circumstances, in which we are facing a future that is unclear, but you could say that Endo’s thinking is even more expansive, originating from a very primordial place having to do with the origins of humanity and society, and civilization.

Coffins and mirrors are both important imagery that appear repeatedly in Endo’s art, and the void presented by an empty coffin, rather than being nothing, is said to be a central place, in other words, a place that indicates the center of community. Community in this case refers to a group whose existence is premised on language or shared illusions.

As indicated by the artist’s series of works entitled “Mirror Phase”, a direct reference to the mirror stage theory proposed by Jacques Lacan, to Endo, mirrors are not expressions or assertions, but simply reflections, indicating that, for humanity, the phenomenal world is of a phenomenal nature similar to a collective illusion shared between reality and the world of imagination. Mirrors could really be a material that allows the artist to allude to the fact that there isn’t actually anything there.

Generally speaking, you could say the world created by Endo’s art might be something akin to a conglomeration of ambiences possessing an indefinable sanctity. He presents his art without either denying or affirming communities formed by people who, neither foolish nor wise, believe, or try to believe, in things devoid of substance.

This show was intentionally given no title other than the artist’s name. But by encountering it and examining it without any preconceptions, viewers can glean endless volumes from Endo’s art.