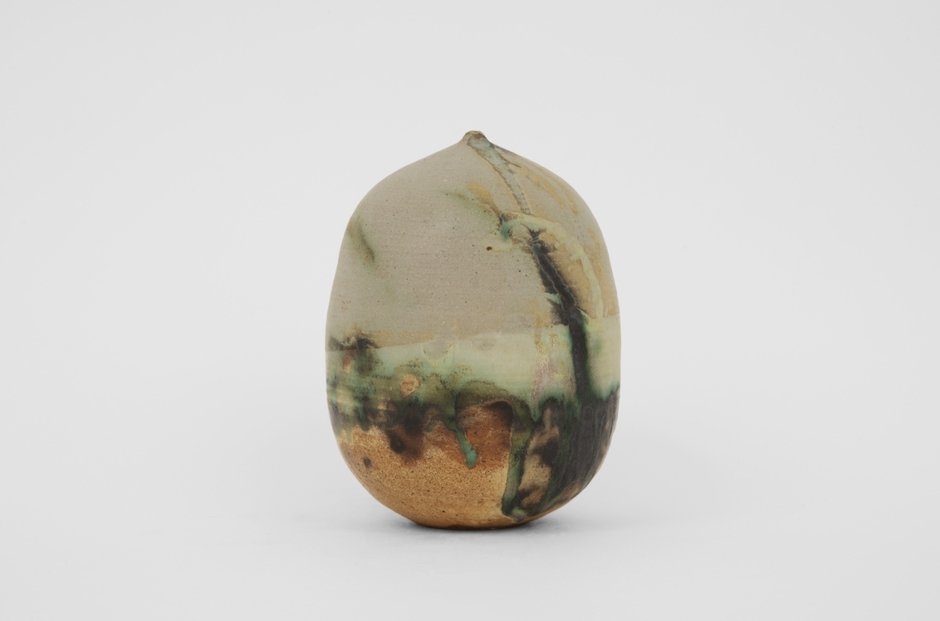 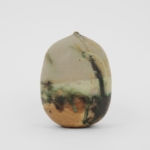 James Cohan is pleased to present a selection of sculptures by the American master ceramicist Toshiko Takaezu from an important private collection, on view at 48 Walker Street and online in our latest Viewing Room. This presentation expands on related bodies of work featured in the 2022 edition of the Venice Biennale as part of Cecilia Alemani’s exhibition, “The Milk of Dreams”.

Toshiko Takaezu (b. 1922, Pepeekeo, Hawaii – d. 2011, Honolulu, Hawaii) had a prolific career that spanned five decades. Her aesthetic approach was influenced by Abstract Expressionism and the traditions of East Asia, including ink painting and the Japanese tea ceremony. Her signature closed forms fuse these visual inspirations and demonstrate the artist’s process of abstraction, in which she experimented with gestural application of glazes, treating the vessel as a canvas in the round.

Takaezu began working towards the closed form in the 1950s, experimenting with a wide range of multipart vessels, as well as pieces with narrow openings that she called “mask pots.” Once she fully enclosed the interior volume – leaving a small opening that allowed for gas to escape during firing, a sort of vestigial spout – she had a format that allowed her to explore a wide range of effects: layering, veiling, and expressionist gesture. The act of closure rendered the vessels functionless, suggesting that they now inhabited the realm of sculpture, as well as pottery. She continued to produce these forms well into the 1990s and 2000s, eventually at monumental scale. In many cases, Takaezu left a paper-wrapped clay bead inside her forms; in the firing, the paper would burn off, leaving behind a hard rattle. This allows for an auditory and mental exploration of the interior volume of the work.

She experimented widely with applications of glaze on the surfaces of her closed forms, drawing influence both from Abstract Expressionism and Asian calligraphic technique. She applied glaze onto the clay with a brush while also occasionally, in a controlled manner, dipping and pouring glaze to create dynamic surfaces. Each work is a 360 degree painting, meant to be experienced at different angles and never all at once. Her palette often references colors seen in nature – particularly her home state of Hawaii – like ochre, black, white, brown and soft grays and varying shades of blue. Applications of yellow, pink, orange and greens were often atmospheric and sometimes suggestive of landscapes through their layering. Striking blue hues figure prominently in Takaezu’s oeuvre. She drew inspiration from her native Hawaii – where it would appear to her in the ocean, fish, shells and flowers. The small form “Untitled”, made around 1960, is a classic representation of her use of blue glaze.

Takaezu evolved a discrete series of globular forms that she called “Moons”. From the early 70s on, these were formed from two halves in molds. Their surfaces may be smooth, shiny, or matte, often featuring a multitude of colored glazes. Takaezu sometimes departed from the spherical, as with “Untitled” (1990s), a three-quarter moon featuring delicate washes of white, greenish gray and yellow ochre glaze swooping over its curved surface. Her moons recall heavenly bodies and planetary forms.

Born in Pepeekeo, Hawaii in 1922 to Japanese immigrant parents, Takaezu studied ceramics first with Claude Horan, the founder of the ceramics program at the University of Hawaii, and later with the influential Finnish- American ceramicist Maija Grotell at the Cranbrook Academy of Art in Michigan. Takaezu was a devoted maker and art educator, teaching first at the Cleveland Institute of Art and then at Princeton University, until her retirement in 1992. She lived and worked on a lush property in rural New Jersey, establishing a steady studio practice and firing her work on site with the aid of apprentices.

Throughout the artist’s lifetime, her work was exhibited widely in the United States and Japan, including a solo exhibition at the Philadelphia Museum of Art (2004) and a retrospective at the National Museum of Modern Art in Kyoto, Japan (1995). Takaezu was the recipient of a McInerny Foundation Grant (1952), Tiffany Foundation Grant (1964), National Endowment for the Arts Fellowship (1980), among others. Takaezu received honorary doctorate degrees from Lewis and Clark College (1987), Moore College of Art and Design (1992), University of Hawaii (1993), Princeton University (1996), and Skidmore College (2004). Her work is represented in collections including the Art Institute of Chicago, DeYoung/Fine Arts Museum of San Francisco, Honolulu Museum of Art, Los Angeles County Museum of Art, The Metropolitan Museum of Art, New York, Museum of Fine Arts, Boston, and the Smithsonian American Art Museum. Her work is included in the 2022 edition of the Venice Biennale, “The Milk of Dreams” curated by Cecilia Alemani.

Toshiko Takaezu passed away in Honolulu on March 9, 2011.