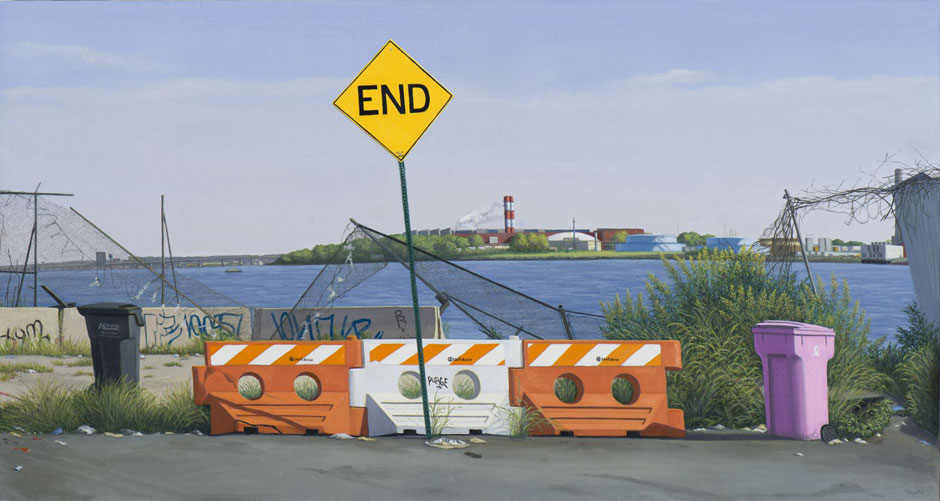 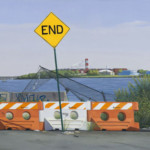 Larko painted her first landscape there in the fall of 2013. To gain access to the site, Larko pushed her painting gear under the fence and squeezed through a break in the locked gate. She managed to finish one small painting before a detective caught her in the act of trespassing and strongly suggested that she not return. Luckily, that painting was almost finished, and she was able to return a few more times to complete it without running into him again.

Fast forward to February 2016, she was driving down RT 95 and caught a glimpse of a colorful structure. Later, when exploring the area, she discovered it was the same golf center that she had painted in 2013. This time around, she found a break on the other side of the site allowing her full access to a number of buildings yet explored.

The Bronx Golf Center is 12 acres in total. This once vibrant family entertainment center now contains crumbling old structures that nature is slowly reclaiming: remnants of a miniature golf course, a driving range, and batting cages that are disappearing under creeping vines and weeds. Since being abandoned, the golf center has become a refuge for graffiti artists, homeless people, and feral cats. Recently, suspicious fires destroyed several of the buildings and the property owners have repaired the fence, making access to the site difficult, if not impossible.

Rumors have it that this site will someday be replaced by a shopping mall and with that another piece of Bronx history will be paved over and disappear. It is, after all, what humans have been doing for centuries; building, destroying and rebuilding. Still it is hard not to mourn the loss of a fun site that once gave many area residents joy. Every day sees a new development, and far too often, the architecture is cookie cutter and unremarkable.

Larko states, “One of the things I noticed while spending the past year and a half painting at the golf center is the abundance of birds, butterflies, geese, raccoons and other animals that thrive there. The overgrown setting had become a de facto nature preserve. Surrounded by wildflowers and birds, it was easy to forget that I was painting in the midst of the busy overbuilt city.” Having been a plein air in the Bronx for decades, Larko has witnessed, and visually preserved, so many transformations to the borough’s landscape. Larko summarizes, “While some transformations have been necessary, I miss the old architecture, signage and natural settings that gave the city its unique visual appeal. In the meantime, my goal is to capture these places before they are lost forever and to keep the stories of these overlooked places alive.”