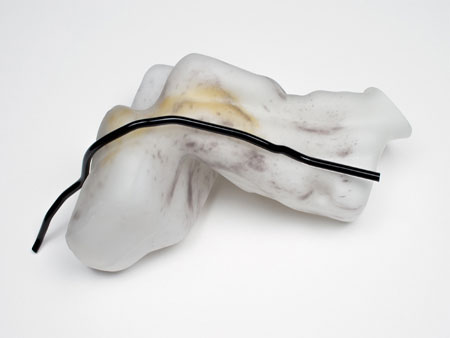 Simon Lee Gallery is proud to present for the first time in Asia, an exhibition of new works by New York-based artist Valerie Snobeck.

They are used plastic reservoirs; stained with wiper fluid, burnt by the engine, patterned with dust, grease, the traces of speed. Their shape and volume engineered to fit perfectly into the voids of the machine’s most essential components. The fluid washes away parts of the environment that have accrued with movement.

They are mold-formed blown glass. Sculpted with exhalation. Breathed into the atmosphere, captured by oceans and plants, consumed and eventually pushed into the inner voids of the mold. At once industrial and organic, they remind us of the impossibility of such segregation.

The once duplicitous has become whole. As the engine bleeds into the atmosphere, as the plastic vessel remolds itself into particles of the air, the reservoirs transfer resemblance of clouds with lightning bolts, organs, glaciers and ocean creatures.

Boundaries are blurred by exchanges and transformations like the accuracy of radiocarbon dating, continually being altered due to excess carbon entering the atmosphere from the burning of fossil fuels. New organic material will appear to be dated the same as organic material of the distant past. Because glass resists this technique it is often used as an isolating container acting as a vessel for time.