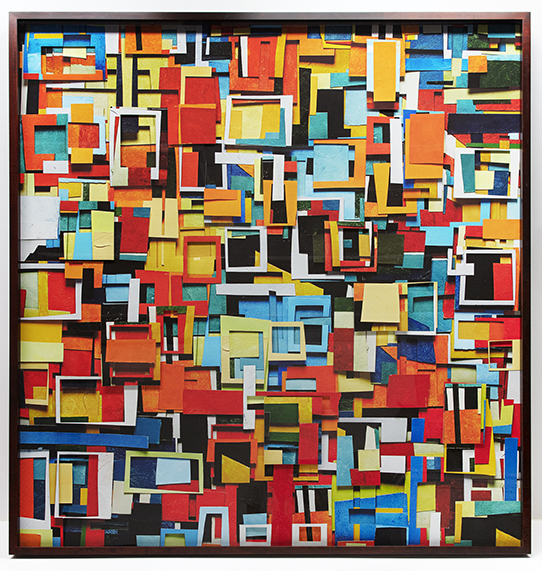 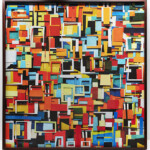 Many of Vik Muniz’ previous series have employed an unexpected material (junk, garbage, chocolate, diamonds, pigments, cut and torn paper, etc.) to create an image culled from the annals of art history, then photographing the result. He uses the image to tell multiple stories – about the original artwork, about our perceptions, and about our layering of memory. Muniz states, “Photography does not reveal the world as a whole, but a carefully edited version of it.” He challenges the verity of an image and our ability to see a photograph less as a documentation of a moment and more as one version of the truth.

For this series, Muniz makes his own paintings, sometimes replicating from source works by artists including Otto Freundlich and Burle Marx. Photographing his painting, he then manipulates the resulting photograph – cutting and reassembling pieces, often re-photographing and repeating, creating something that hovers between painting and photography. Testing our perceptual limits, the “real” versus the “illusory” becomes a space of play for the viewer to decipher.

Vik Muniz’ work has been exhibited nationally and internationally with solo exhibitions at the Sarasota Museum of Art, Florida, High Museum of Art, Atlanta, GA and Mauritshuis, The Hague, Netherlands. His work is in the collections of the Art Institute of Chicago; the Los Angeles Museum of Contemporary Art; The J. Paul Getty Museum, Los Angeles; the Metropolitan Museum of Art, New York; Museum of Modern Art, New York; Museu de Arte Moderna de São Paulo; San Francisco Museum of Modern Art; and the Victoria and Albert Museum, London. He was named a UNESCO Goodwill Ambassador in 2011 for his work with the catadores of Rio de Janeiro, on whom the 2010 documentary “Waste Land” was based. He recently opened Escola Vidigal, a school in the favela Vidigal in Rio de Janeiro, which offers preschool and afterschool programs in art, design, and technology in promotion of visual literacy for children ages 4-8. He lives and works in Brooklyn, NY and Rio de Janeiro, Brazil.