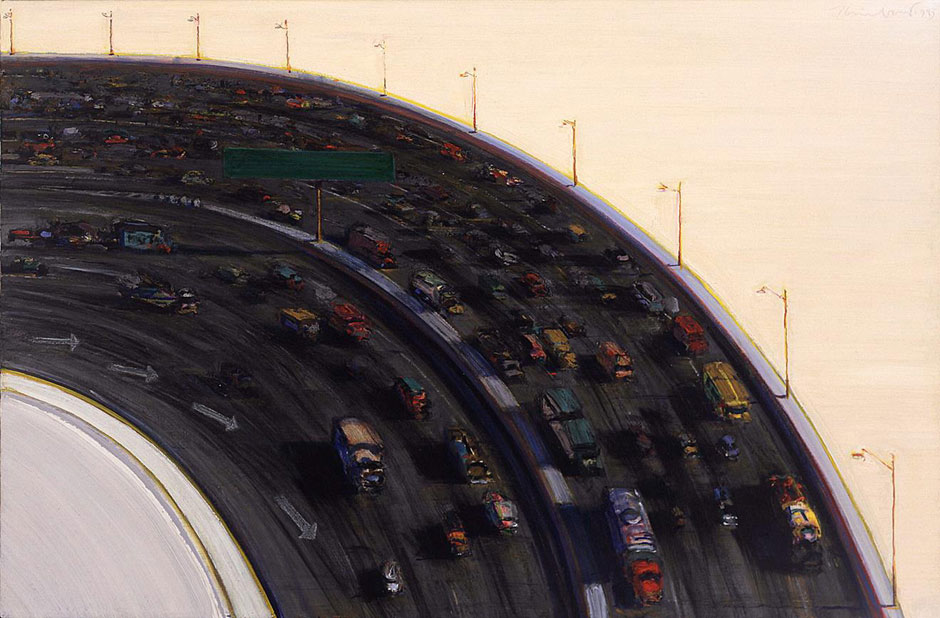 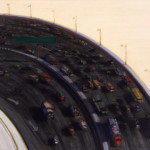 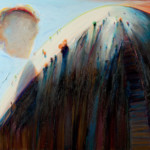 Allan Stone Projects is pleased to present “Wayne Thiebaud: Land Survey”. This exhibition celebrates one of the most prolific bodies of work from one of America’s most prominent artists. A selection of paintings and works on paper ranging from 1965 – 2000 highlight Thiebaud’s landscape and cityscape subjects. Significant pieces include the majestic “White Mountain”, and the inventive city scene, “Freeway Curve”, both from 1995.

Along with his food and dessert paintings, Thiebaud has consistently made landscapes throughout his career. Recurrent themes of surreal ridges, looming cliffs, winding riverscapes, and vertiginous streets are derived from Thiebaud’s surrounding environment in Sacramento and San Francisco, California and his native Arizona. With their seemingly improbable compositions, these are some of Thiebaud’s most complex and innovative works, evoking the natural wonders of Yosemite, the Sierra Nevada mountains, humble farm ponds, rolling hills and the bustling streets of San Francisco.

Thiebaud’s landscapes and cityscapes unite representational and abstract forms within a single picture, capturing the mood or feeling unique to a particular place. Although these paintings and studies are inspired by specific locations, Thiebaud heightens their experiential effects. He comments, “I’m not just interested in the pictorial aspects of the landscape – see a pretty place and try to paint it – but in some way to manage it, manipulate it, or see what I can turn it into.” (*) This is the gallery’s 27th solo exhibition of Thiebaud’s work.

Wayne Thiebaud was born in 1920 in Mesa, Arizona. From 1938-1949, he worked as a cartoonist and designer in California, New York and in the U.S Air Force. He attended San Jose State College (now San Jose State University) followed by Sacramento State College (now California State University, Sacramento), where he received his BA in 1951 and his MA in 1952. Thiebaud had his first major solo exhibition in 1962 with the Allan Stone Gallery. The exhibition received critical and commercial success, launching Thiebaud’s career. Allan Stone was Thiebaud’s primary dealer, friend and collector for over forty years, until Stone’s death in 2006.

Throughout his career, Thiebaud has been celebrated with numerous awards and solo exhibitions. Highlights include the 1994 National Medal of Arts, given by President Clinton and a 2001 Lifetime Achievement Award from the American Academy of Design, New York. Major retrospectives were held at the San Francisco Museum of Modern Art in 1985 and a traveling exhibition that went to the de Young Fine Arts Museum of San Francisco, the Modern Art Museum of Fort Worth, the Phillips Collection in Washington D.C., and the Whitney Museum of American Art in New York in 2001. Thiebaud will have a solo exhibition at the new Jan Shrem and Maria Manetti Shrem Museum at University California, Davis in January 2018. He was a professor of fine art for over forty years at UC, Davis. Thiebaud lives and works in Sacramento.