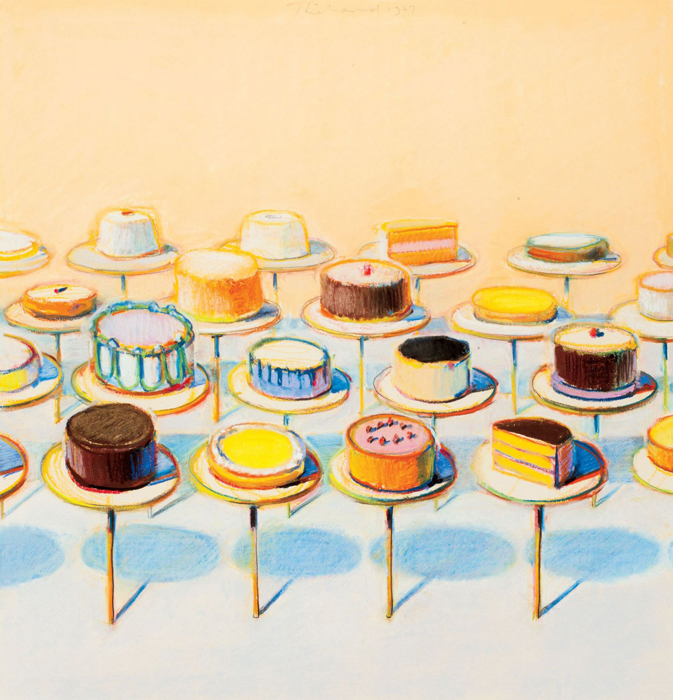 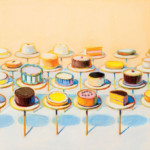 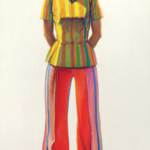 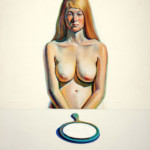 Allan Stone Projects is delighted to present a major survey of paintings and works on paper by Wayne Thiebaud. Selected from the Allan Stone Collection, the exhibition will include over twenty works, some of which have never been publicly exhibited. Highlights include the vibrant pastel on paper, “Cakes”, 1967, a monumental figurative painting, “Girl in Striped Blouse”, 1973-75, and a rich oil painting, “Sunglasses”, 1983-85. This will be the gallery’s 26th solo exhibition of Thiebaud’s work.

Since his first exhibition with the Allan Stone Gallery in 1962, Thiebaud has become one of the most prominent artists of our time. As his primary dealer, friend and collector for over forty years, Allan Stone celebrated Thiebaud’s range of style and subject matter, embracing his mastery of figuration, his inventive depictions of landscapes and cityscapes, and his nostalgic renderings of food and everyday objects.

Often categorized as a New York Pop artist, Thiebaud does not identify himself as such, having begun his paintings of quotidian American scenes in the mid 1950’s well before the explosion of Pop art. Mark Rosenthal, the author of this exhibition’s catalog, posits that Thiebaud has more in common with the traditions of Realism and Impressionism, nodding to masters like Eakins, Degas, and Cézanne in his modernist depictions of the American vernacular. Rosenthal observes that Thiebaud’s paintings are deceptively complex, as one begins to realize that his “evolution has not been a matter of one subject replacing the other, but a series of moves and returns so that each work is simply of a piece. Moreover, Thiebaud never stops intersecting with art history, whether vis-à-vis the modernist still life or an obsession with a single grand landscape.”* This exhibition affirms Wayne Thiebaud’s range of technique and ingenuity that distinguishes him as an exceptional American artist.

Wayne Thiebaud was born in 1920 in Mesa, Arizona. From 1938-1949 he worked as a cartoonist and designer in California, New York and in the U.S Air Force. Thiebaud attended San Jose State College (now San Jose State University) followed by Sacramento State College (now California State University, Sacramento), where he received his BA in 1951 and his MA in 1952. For over fifty years, Thiebaud has been celebrated with numerous awards and solo exhibitions. Highlights include the 1994 National Medal of Arts, given by the then President Clinton, a 2001 Lifetime Achievement Award from the American Academy of Design, and a 2007 Bay Area Treasure Award from the San Francisco Museum of Modern Art. He has had major retrospectives at the San Francisco Museum of Modern Art in 1985 and a 2001 retrospective that traveled from the de Young Fine Arts Museum of San Francisco, to the Modern Art Museum of Fort Worth, the Phillips Collection in Washington D.C., and the Whitney Museum of American Art. Thiebaud lives and works in Sacramento, California.

*The exhibition is accompanied by a fully illustrated catalog with an essay by Mark Rosenthal, titled “Reflecting on the Coordinates of Wayne Thiebaud’s Art” (quote from p. 7).