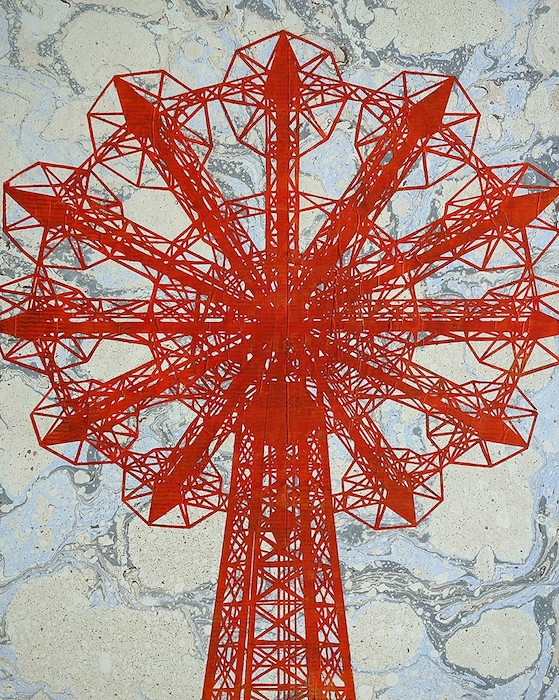 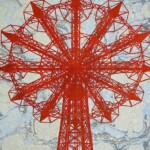 Margaret Thatcher Projects is pleased to announce an exhibition of new collages by William Steiger, the artist’s twelfth solo show at Thatcher Projects, and his first show featuring only imagery of New York City.

William Steiger deconstructs familiar architecture in a manner that questions our perception of time and space. The subjects of his paintings include machinery, modes of transportation, buildings and landscapes, each distilled to their most vital elements. In his recent work, Steiger depicts this imagery by collaging painted paper and found ephemera, such as maps, charts and marbled endpapers, to produce striking vistas. He meticulously cuts each layer then mounts it on panel, adeptly balancing the pieces to capture the essence of a scene while still highlighting each part. In the final compositions, every façade, shadow line or girder is defined by texture or color to represent a known landscape from a challenging angle.

“New York, New York” is Steiger’s celebration of the city in which he lives and works. This exhibition exclusively focuses on collages of urban landmarks that characterize Manhattan and the boroughs. The scale of the work is intimate with collages no larger than 20 x 16 inches, yet the delicate layers of paper produce cityscapes that are bold and monumental. In “Parachute Jump”, the Coney Island thrill ride is made of slivers of deep red paper that pop against a swirling blue and cream sky. In “ESB”, the slab-like edifices of midtown Manhattan partially obscure the dominant, elegant form of the Empire State Building as seen from a low vantage point. Warm and cool papers create the volume of the skyscrapers, with perforations defining the many windows that hint at activity within.

Steiger’s work has always been a response to his surroundings. New York City, his immediate environment, is a conceptual and physical space that can be traced and mapped in many ways. Steiger’s found-paper representations of New York structures delineate touchstones that connect us all. Despite the effects of the COVID-19 pandemic on the fabric of the city, the enduring qualities of New York’s architecture and landmarks transcend the fragility of the times.

William Steiger received a B.A. in Art from the University of California, Santa Cruz and an M.F.A. in painting from Yale University in 1989. Steiger has been a recipient of numerous grants, fellowships, and awards, including The Elizabeth Greenshields Foundation Award, Basil H. Alkazzi Travel Award, London, England, and The Phelps Berdan Memorial Award for Distinction in Painting, Yale University. His work is included in numerous private, public and corporate collections. Steiger has had more than 35 solo exhibitions worldwide including New York, Seoul and Tokyo. He has been making prints with the prestigious publisher Pace Prints since 2004. In 2011, Hudson Hills Press published a 200-page monograph on the artist’s work with 13 contributing writers and over 200 images.