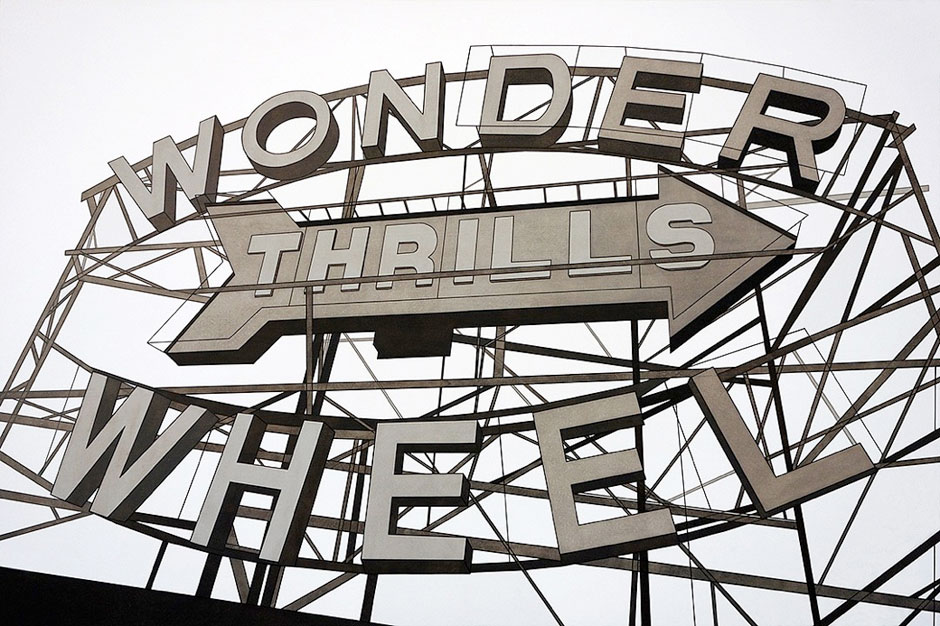 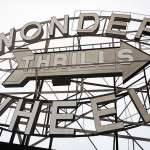 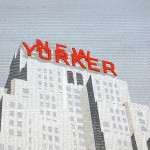 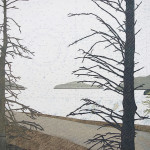 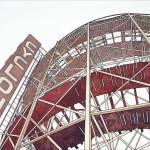 In celebration of the gallery’s eighteenth anniversary, Margaret Thatcher Projects is pleased to present “Thrills”, William Steiger’s tenth solo exhibition at the gallery. The collection of new paintings and collages invoke wonder and awe through the splendor of early modernism and rural imagery.

Wires, tracks and horizons extend through the works, creating an expansive scene where sky, ground and architecture move far beyond the confines of the canvas and paper. Though figuratively devoid of humans, Steiger establishes a distinct, often dramatic, perspective, capturing fragments of structures and landscapes where the viewer becomes the sole active participant standing before a monumental scene.

Imparting a sense of timeless sentimentality, Steiger renders modern landscapes from the first half of the 20th century, often contrasting unspoiled horizons with urbanization. The disparate settings are intertwined through an idealistic lens in which the past co-habituates with the present.

William Steiger received a B.A. in Art from the University of California, Santa Cruz and an M.F.A. in painting from Yale University in 1989. Steiger has been a recipient of numerous grants, fellowships, and awards, including The Elizabeth Greenshields Foundation Award, Basil H. Alkazzi Travel Award, London, England, and The Phelps Berdan Memorial Award for Distinction in Painting, Yale University. His work is included in numerous private, public and corporate collections. Steiger has had more than 35 solo exhibitions worldwide including New York, Seoul and Tokyo. He has been making prints with the prestigious publisher Pace Prints since 2004. In 2011, Hudson Hills Press published a 200-page monograph on the artist’s work with 13 contributing writers and over 200 images. The artist currently lives and works in New York City.