Works from a Private Collection 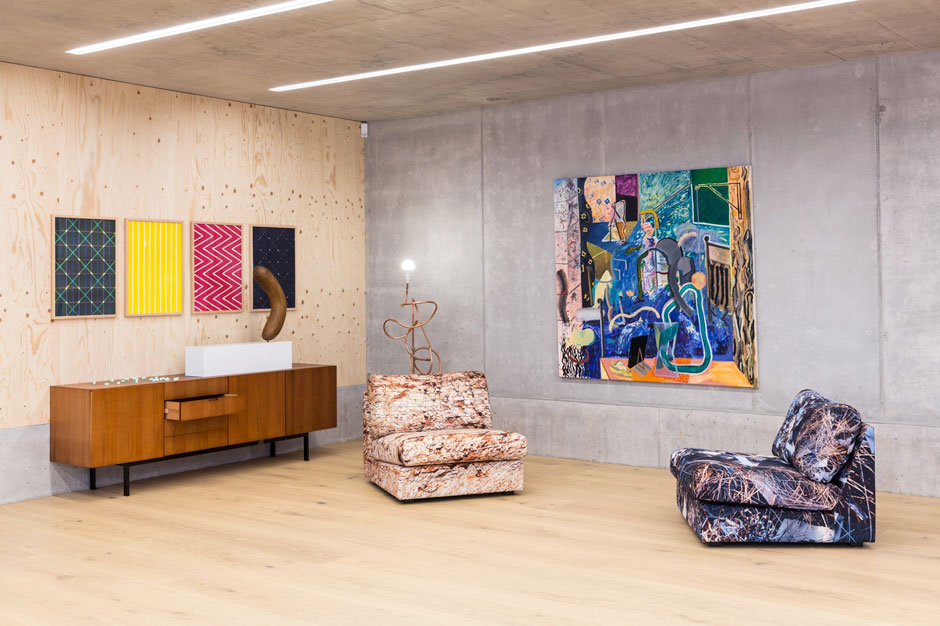 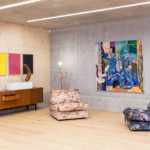 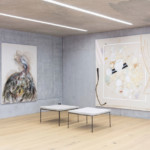 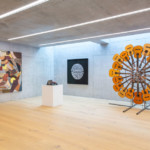 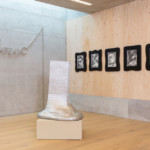 The exhibition showcases works by both internationally acclaimed, as well as younger generation artists – all of them sourced from a private collection started in the early 2000’s. The show emphasizes the value of looking at art through the eyes of a collector. Collectors, led by their vision and taste, venture into all areas and media of artistic production. The disparate approaches and artistic tendencies of the showcased artists become the trigger for a wider discourse on the practice of collecting art today.

The unconventional juxtaposition of works like the one represented by Erwin Wurm (Mies van der Rohe melting), Monica Bonvicini (Prozac), and Armen Eloyan (Basement) – activate a new conversation on present-day sculptural tendencies. Especially the large-scale sculptural installation “Flower-Guitar-Wheel” by Nic Hess, with its clever use of everyday objects, stripped of their original function and context, to create new and unusual constellations, challenges the boundaries of the sculptural medium.

The combination of paintings by Shara Hughes, Rebecca Morris and Florian Meisenberg, represent a new generation of painters who have discovered different working methods and forms of expression, enabling each of them to develop a wholly personal and independent visual idiom. All three take great pleasure in the act of painting, in experimenting and in consciously opting for the myriad of possibilities offered by painting as a genre.

David Adamo (*1979 Rochester, USA). Lives and works in Berlin, Germany. Adamo works with a wide range of materials, often incorporating typically masculine objects such as knives or baseball bats. His works have featured in numerous group exhibitions such as “Greater New York” at MoMA P.S.1 or the Whitney Biennial.

Doug Aitken (*1968 Redondo Beach, USA). Doug Aitken has set influential accents in contemporary art, in particular with his image, sound and space of equally fascinatingly choreographed video installations. His works have featured in exhibitions and important institutions such as the Centre Georges Pompidou in Paris, the Whitney Museum of American Art, to the Hirshhorn Museum and Sculpture Garden or the Vienna Secession.

Monica Bonvicini (*1965 Venice, IT). Lives and works in Berlin. Since 2003 Bonvicini is Professor for Performative Arts and Sculpture at the Academy of Fine Arts in Vienna and since 2017 holds the professorship for sculpture at Universität der Künste in Berlin. She works in different media, from photography to drawings and installations. With works often aimed at provocation, she addresses roles of power and gender in society amongst others.

Ross Chisholm (*1977, Redhill, UK). Lives and works in London. Chisholm’s paintings, often inspired by 18th and 19th Century pieces, explore the genres of portraiture and historical images in new ways. He has taken part in numerous group shows around the world.

Claudia Comte (*1983, Grancy, CH). Comte is interested in exploring the memory of materials and often uses new technologies such as 3D printing in the production of her works. She is well known for her site-specific installations and her work has been shown in solo and group exhibitions internationally.

Armen Eloyan (*1966 Yerevan, ARM). Lives and works in Zurich. His works are mostly inspired by comics and street art and often feature animalistic figures as well as human characters. He has had regular solo shows in Europe and his works have been included in various group exhibitions.

Anna Fasshauer (*1975, Cologne, DE). Lives and works in Berlin. Fasshauer studied Fine Art at De Montford University Leicester and completed her MA in Fine Art at Chelsea School of Art and Design in London. She is known for her large sculptures and is fully involved in the production process herself, shaping the material in real time.

Andreas Greiner (*1979, Aachen, DE). Lives and works in Berlin. Greiner has studied under Rebecca Horn and Olafur Eliasson. His work is rooted in the natural sciences, focusing on various life forms such as bacteria, algae and different animals.

Nic Hess (*1968, Zurich, CH). Lives and works in Zurich. Nic Hess is known for his stirring, dramatic decorations of walls and interior spaces, which he covers with gestural ciphers and pictures – here playfully dynamic, there with irony. His installations have been seen in numerous solo and group exhibitions in Europe, the USA and Mexico.

Shara Hughes (*1981, Atlanta, USA). Lives and works in New York. Hughes studied at the Skowhegan School of Painting and Sculpture and completed her BFA at Rhode Island School of Design. She has had various solo exhibitions in the USA and was included in the 2017 Whitney Biennial.

Florian Meisenberg (*1980, Berlin, DE). Lives and works in New York. Meisenberg began expanding his artistic practice beyond painting into video, performance and virtual projects early on during his studies at the Kunstakademie Düsseldorf. He combines the digital and analogue in his works to create a new juxtaposition.

Rebecca Morris (*1969, Honolulu, USA). Lives and works in California. Morris is Professor of Painting at Pasadena City College and has lectured at numerous prestigious colleges such as Columbia University and UCLA. She received her BA from Smith College and her MFA from School of the Art Institute of Chicago. Her abstract paintings have been shown at the Whitney Biennial and the Museum of Contemporary Art in Chicago amongst others.

Kerim Seiler (*1974, Bern, CH). Lives and works in Zurich and Berlin. He aims to bring architecture and art into a dialogue, where the perceptions of space play an important role, as does the experience of colour as well as colour theories. Numerous works are large scale public installations in Switzerland and abroad.

Loredana Sperini (*1970, Wattwil, CH). Lives and works in Zurich. Sperini works in different media, from drawing to embroidery and installations, using a wide range of materials, including glass, textiles and wax. She uses these often emotional materials with a feminine connotation to great effect, thereby creating works that can seem eerie and uncanny.

Franz West (*1947, Vienna, AUT, 2012 Vienna, AUT †). West has regularly participated in large exhibitions such as Documenta and the Venice Biennale. His work often features ordinary materials such as plaster, glass bottles, wire and papier-mâché. Apart from sculpture and prints he is also known for his performance works.

Erwin Wurm (*1954, Bruck an der Mur, AT). Lives and works in Vienna and New York. Wurm has worked in almost all media and is known for his “One Minute Sculptures”, showing people with everyday objects in various unnatural poses. His work is often humorous in its approach and manipulates familiar objects to great effect.