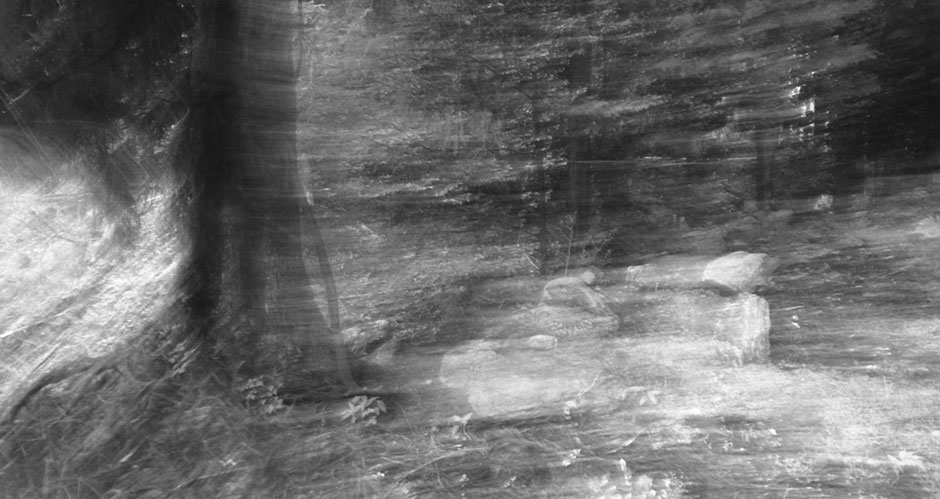 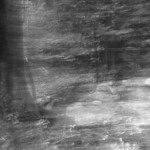 The “Ryugu” (Dragon Palace) of the exhibition’s title is an imaginary palace where dwells the Dragon god; it is generally said to be located deep inside a grotto, at the bottom of the sea, or beyond the ocean’s horizon. According to the “Kojiki”, it is “a palace with roofs like the scales of a fish, the residence of the Divine Sea Lord.” In contrast, it is depicted in “The Tale of the Heike” as the realm of the dead (Chapter 11: “The Drowning of the Former Emperor”). The hilly countryside to the north of Kyoto, where the artist now lives, is said to have been settled in ancient times by immigrants from the Korean kingdom of Baekje; legends concerning dragon palaces can be found along the 35th parallel north, which passed through Baekje. Taking a different perspective on dragons, Maeda says that they featured in the beliefs of the prehistoric Jomon era; suppressed in antiquity, they are now being unleashed. Thus Maeda, who lives and works in a traditional thatched house in a valley deep in the countryside, has named his house “Ryugu”, viewing it as a kind of liminal space between this life and the next. This exhibition presents installations that use ingredients from the “Ryugu” and the rural villages, such as water, crystal-studded stones, thatch for the roofs, and ash from the fireplace.

This exhibition is an attempt to use water to give expression to a new kind of “wave scene,” as the titles of the works suggest: “Hatsuboku Chii Ryugu Sansui-zu” (Splashed Ink Landscape: Dragon Palace at Jirisan), “Hatsuboku Ryugu Taki-zu (Splashed Ink: Dragon Palace Waterfall), “Hatsuboku Mizu Irori (Splashed Ink and Water: Fireplace). The etymology of “iwa”, the Japanese word for “rock,” derives from “iwau”, which means “to worship a deity.” While found above ground, rocks embody the life force, the spiritual force that wells up from beneath the ground and serve also to symbolize the spirits that lie dormant there. As such, they have been thought of as “yorishiro”: objects that can be inhabited by deities. A rock is picked up from the ground around the Ryugu, dipped into the ink (which has been dissolved with river water), and applied to traditional Washi paper, which is made from straw that has picked up the ground’s waves. The straw is turned into paper with the help of a papermaker, and the whole comes together as Maeda wields the rock and the ink. In front of the viewers, the spiritual space of the “Ryugu” is expressed by means of a pure “yorishiro”, formed through the agency of man and nature.

Nature worship was an essential part of life in ancient Japan. When deities are considered immanent in every natural thing, then mountains and seas and rivers are deities; the sun, the moon, the stars, rain, wind, thunder, as well as the seasons and time are deities. The idea is that there is therefore nothing in this world, in this universe, that is not a deity, and we exist alongside them; we can view Maeda’s works as the forms, in all their variety, that are manifested through the agency of people and these “deities.” In Maeda’s methods and works, we can sense something of this idea that runs back to antiquity.

Yukinori Maeda was born in 1971. He is currently based in a traditional thatched house in the countryside north of Kyoto. Whether through photography, three-dimensional media, or painting, he expresses a spiritual space whose subjects are his personal experiences. He was featured in the Museum of Contemporary Art Tokyo’s 2007 exhibition “Space for Your Future”, and in 2009 he held his first solo exhibition “UNIVERSAL LOVE” at Taka Ishii Gallery. He was subsequently featured in the Museum of Contemporary Art Tokyo’s 2010 exhibition “MOT Collection: Plastic Memories – to illuminate now”, and Yokohama Museum of Art’s 2011 exhibition “Yokohama Triennale 2011: OUR MAGIC HOUR – How Much of the World Can We Know?.” He held his second exhibition “ECHOES” at Taka Ishii Gallery in 2011. Recent exhibitions include 2016’s “Omizue: Iwamino-kamito-mizu” at Iwami Arts Museum, held under the banner of Cosmic Wonder & Kogei Punks Sha, and “Kami” at Shiseido Gallery in 2017.