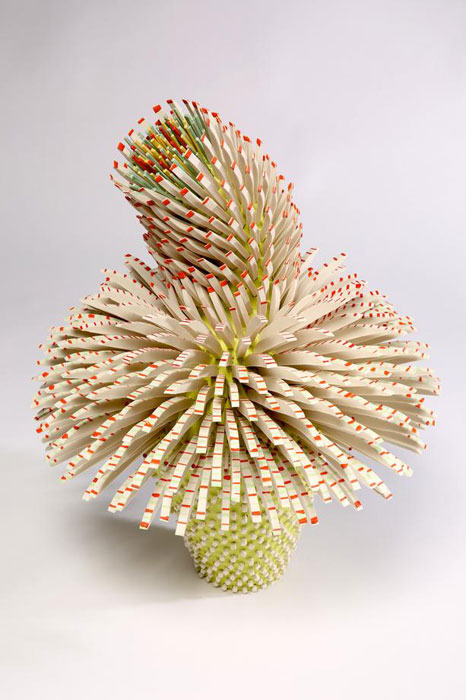 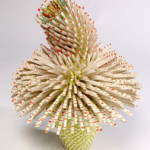 Featuring large-scale sculptures and smaller objects, the exhibition highlights Peled’s labor-intensive process that bridges narrative and formalist elements. Peled utilizes a process of creation and destruction to make sculptures consisting of thousands of handcrafted porcelain shards resulting in works that can be read in relation to art historical tradition, outsider art, and natural phenomena.

The sculpture’s narrative impulses lean to encounters with the otherworldly—like complex topiaries marking a not-so-distant land – yet they remain distinctly tied to earth’s patterns. This conflation of the foreign and familiar creates a frenzied dislocation in the work. Inspired by migratory habits of birds, a sweep of feathers, and cycles of change, the works spiral outwardly in rhythmic patterns, interpreting not only the dynamism of nature, but also the startling strangeness of a life lived in transition.

Using white and colored porcelains, Peled transforms sharp slivers of porcelain into feathers, petals, leaves, and spines that describe objects of unknowable origins: seductive but untrustworthy. The forms are complexly ordered from the inside out, often bulging or spilling over with textures both delicate and severe. In some works, large scale-like ceramic pieces appear airy, delicate, and fluffy, as if one’s breath might break it. In others, Peled’s fragments are geometric barbs that mysteriously take on an alluring form – offering a sense of softness despite a sharp actuality. The forms are never static; the visual dance of sharp ceramic parts conveys a sense of constant movement. Like a murmuration of starlings, the sculptures appear to shift shapes as you move around them, an identity becoming and unbecoming in front of you.

The act of making for Peled is a feat of endurance, improvisation, and adaptation with the aim to embody a fleeting but fundamental feeling of mystery. The construction of her sculpture parallels negotiations any outsider makes in encountering a new world as they delicately construct a self that is both adaptable and resilient.