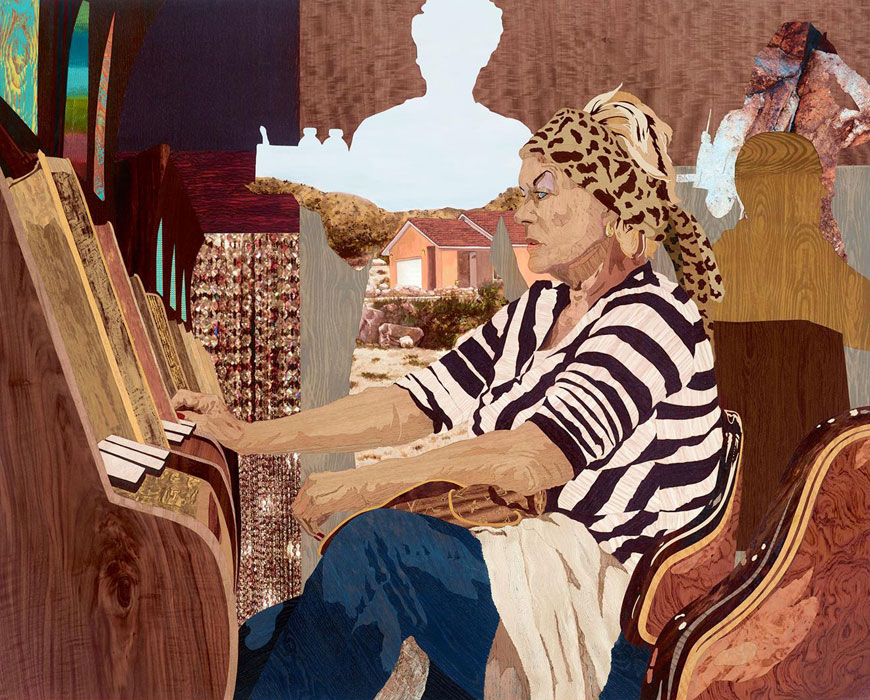 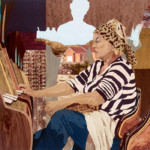 “The Backwards Forward” is a show of new works by Brooklyn-based artist Alison Elizabeth Taylor. In the artist’s fifth solo gallery show, Taylor’s new work reveals an evolution in media and technique that demonstrates her restless creativity and originality. Here, Taylor assembles small parts cut from diverse materials to create a disjointed whole. Well-known for her use of the technique of marquetry, recently, Taylor has been reinventing the form by adding paint and photographic imagery such as desert floors, rusting neon signs and rotting wood.

In these new works, Taylor examines the pursuit of pleasure in contemporary American public life, inspired by scenes in and around Taylor’s hometown of Las Vegas. The mania found in the maximalist casinos and bars of her hometown is contrasted with works that explore the desire to escape into the natural world. The subjects of these wall-based works range from casino architecture, portraits of people playing the slot machines, domestic interiors and wide open Western landscapes. Taylor builds narratives from life observed, from her drawings of people at play, her photographs of Las Vegas and aerial photography from the NASA website. Combining and recombining these sources is a process the artist refers to as “Frankensteining.”

Particularly interested in how artists from the past developed their subjects, Taylor’s research led her to look at paintings from before and between the World Wars. She examined how constructed or play-acted these tableaus were, and how personal or distant their subjects. Taylor refers to Thomas Eakins who painted from photographs of his students frolicking in the nude. Manet and Lautrec found their painting references during visits to the Folies-Bergère. Taylor also looked at painters Otto Dix, Christian Schad and George Grosz of Weimar Berlin between the World Wars, known as the Verists or “Neue Sachlichkeit” who rejected romantic idealism. Further, Taylor found parallels in contemporary life such as in the Las Vegas casinos that draw large numbers of people engaging in public pursuits of pleasure.

Themes that run throughout the works in “The Backwards Forward” were inspired by this research and including the pursuit of payout in “Sam’s Town”, and the hierarchy of server/dealer/entertainer/customer in “The Cosmopolitan” and “The Desert Inn”. Tammy’s Place depicts the creation of a social network during target practice at a shooting range. In “Forgive Me, Mr. Eakins”, Taylor borrows and combines several of Eakin’s 1890 photos to create a photo collage from which to draw.

In this new body of work, Taylor is a pragmatist and observer of public life. She depicts her subjects at play, in the contemporary equivalents of the pleasure palaces of yore, at home and on the range – with her sharp critical eye balanced by an insider’s understanding.

In September, Alison Elizabeth Taylor’s “Reclamation”, a room-sized permanent installation opened at the Emma and Georgina Bloomberg Center at the new Cornell Tech campus on Roosevelt Island, NYC. “Reclamation”, 2017 is an architectural space on the verge of giving way to the forest. Taylor writes, “Nature never pauses in its race to reclaim, and innovation is the human response against this flow towards entropy. The continual churn of the cycle between nature and human endeavor stands at the core of this work.”