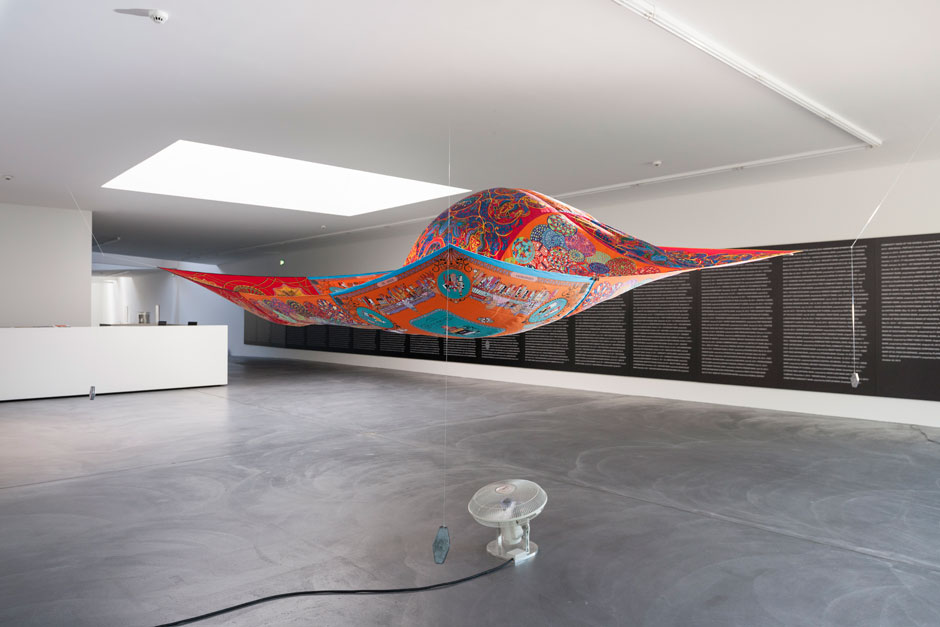 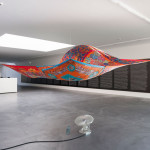 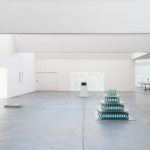 Now Von Bartha is pleased to present its first solo exhibition with Copenhagen based art group SUPERFLEX, who are renowned for their playful, subversive analysis of our economic and social structures. The exhibition, “Euphoria Now”, features new works and past projects, including large-scale installations, films and long-term, process-based projects. SUPERFLEX describe their works, which are related to economies, democracy and self-organisation, as Tools, often inviting participation from the visitor. Often the works are assisted by experts who bring in their special interest as well. All tools can be further used and modified by their users.

On display at von Bartha is an installation consisting of numerous 3D printed flower pots, each of which is a model of, and will be named after, one of the world’s top twenty investment banks. Out of these grow a range of psychotropic plants, including the cactus and the poppy. With this tool, SUPERFLEX scrutinizes unbalanced economic conditions within the global market, examining relations between producer and consumer, appropriation as a strategy, the violation of ownership and various systems of power. The euphoric effects created by the drugs derived from the plants – such as mescaline, opium or marijuana – are compared with the euphoria felt by those in the financial industries when dealing with large amounts of money. By contrasting the use of psychotropic drugs with the financial world, SUPERFLEX examine the global social order, questioning whether the commercial systems we live by are themselves a parallel reality, created by our own euphoria and psychoses, and if so, how should they be treated?

SUPERFLEX continue to confront issues of copyright, intellectual property and trademark infringement with a new Tool that directly references contemporary artist Hans Haacke’s 1960s installation “Blue Sail” that saw chiffon fabric suspended in the air over an oscillating fan. In SUPERFLEX’s version fake Gucci, Hermès and other designer silk scarves from Thailand are stitched together to create the sail.

Also presented are “Non Alcoholic Vodka” (2006), “Modern Times Forever” (2011) and “Corruption Contract” (2009). “Non Alcoholic Vodka” a work that originally highlights the issues faced by the minority Russian population in Estonia. The vodka itself has the taste of vodka but does not contain any alcohol. The Tool was first presented in the exhibition “Shiftscale – Sculpture at the Extended Field” in 2006 at the Kumu Art Museum, Tallinn (Estonia) – a museum neighbouring one of the largest Russian ghettos in the city. More than 25% of the Estonian population are Russian, a majority of which are isolated from the rest of society because of cultural differences: they do not speak the language, are less educated and often have drinking problems. At the opening of the exhibition, the gallery’s bar only served non-alcoholic vodka.

“Modern Times Forever” is a film about what would happen to the Stora Enso building (Helsinki) as an architectural and ideological symbol over the next few thousand years, if the building was only affected by the ravages of time. “Modern Times Forever” was first shown in Helsinki Market Square on a 40m² LED screen, so that the original building could be viewed simultaneously with the building in the film. The film itself lasted ten days (the duration of the exhibition) and was played continuously during this time period. At von Bartha, “Modern Times Forever” again runs on its ten day loop.

With “Corruption Contract”, SUPERFLEX aims to threaten the stability and security of society, to undermine the institutions and values of democracy, ethical values and justice, and jeopardize sustainable development and the rule of law. By signing the contract, the client agrees to actively be involved in, or solicit others to be involved in, corruption activities during the contract period. The wording, as well as the definition of corruption, is based on the text of the United Nations Convention against Corruption. The “Corruption Contract” is a 84 x 60 cm, handwritten document.

The exhibition will also include Brion Gysin’s legendary “Dreamachine” – one of only four in existence. The “Dreamachine” is a flickering light device that produces visual stimuli in the observer. Gysin, a surrealist painter and the friend and partner of William Burroughs, devised the idea in the 1960s during his attempts to go into trancelike states using light stimulation. The “Dreamachine” enjoyed a resurgence in 1976 when the art dealer Carl Laszlo invited Gysin to visit Basel where he met the young gallerists Miklos and Margareta von Bartha (co-founders of von Bartha). Inspired by Gysin, Miklos von Bartha constructed the four fully functioning “Dreamachines” which are still in existence today. The ideas behind the “Dreamchine”, such as the exploration of trance like states and hallucinatory experiences, reflect the themes explored by SUPERFLEX in “Europhia Now”.