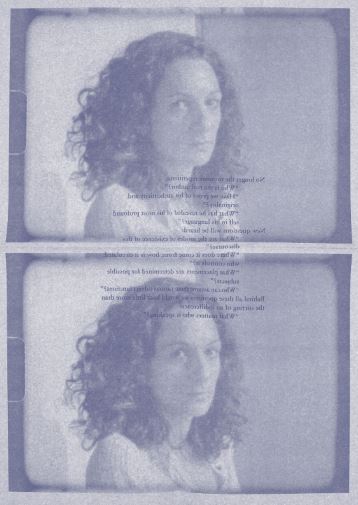 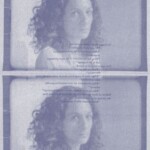 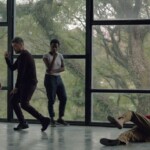 Alexander and Bonin is pleased to announce the third iteration of “Tandem”, a project curated by Luiza Teixeira de Freitas. “Tandem” consists of a series of five exhibitions presented throughout 2019 that run parallel to the gallery program, each one a dialogue between two distinct artistic practices.

“Tragedy dramatizes, in the sense that it puts into action; it dramatizes an interpretation,” states the actor in Alejandro Cesarco‘s “Everness”, 2007. A second monitor restages this scene ten years later in “Revision”, 2017; the actor is older, the set has changed, and a few words have slipped into the past tense as time has shifted the bounds of tragedy. Citation, as both theme and methodology, is similarly deployed over the three prints of “The Structure of Feeling”, 2016. Taking stills from the artist’s 2016 film “The Inner Shadow” and annotating them with quotes from James Baldwin, Michel Foucault and Maurice Blanchot, Cesarco traces the shifting eddies of time, memory and interpretation to ask how meaning unfolds. The artist, born in Montevideo in 1975, lives and works in New York and has an upcoming solo exhibition at the Witte de With in Rotterdam this fall.

On view in the video gallery are two films by Tamar Guimarães, “Canoas”, 2010 and “O Ensaio [The Rehearsal]”, 2018. The changes that Brazil has gone through over the last decade – namely, the rise of new social movements, the reemergence of the political right, and the fragmentation of the left – frame the dialogue between the two works. “Canoas”, filmed in a 1950s house built by Oscar Niemeyer, is an investigation into modernism in Brazil and the way that architecture shaped Brazil’s national identity. The optimism at the heart of the building’s architecture contrasts with the racial and class tensions that underlie both the 1950s in Brazil and the maintenance of the building itself. Isabel Zuaa, who plays a maid in “Canoas”, appears in “O Ensaio [The Rehearsal]” as the director of an adaptation of a story by Brazilian author Machado de Assis, which also takes place in a Niemeyer Building. Yet, her position as director is continuously undermined as Tamar Guimarães makes the viewer confront the repetition of history and the difficulty of overcoming past injustices. The artist, born in Belo Horizonte, Brazil in 1967, lives and works in Copenhagen.