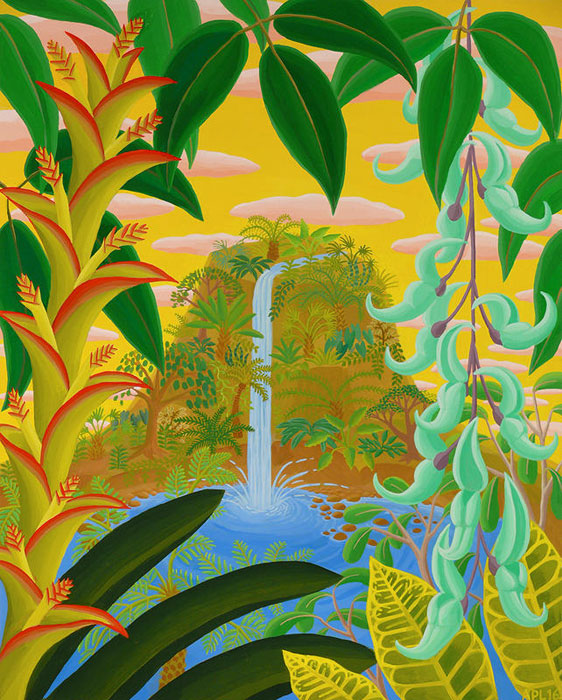 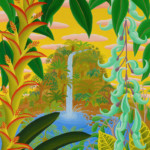 Monya Rowe Gallery is pleased to announce a solo exhibition by Amy Lincoln titled “Tropic Apparition”. This is the artists’ first solo show at the gallery.

In “Tropic Apparition”, Lincoln presents a new series of paintings depicting tropical landscapes inspired, in part, by the greenhouse at Wave Hill in the Bronx, New York and the conservatory at the Bronx Botanical Garden. These constructed spaces of an idealized or archetypal vision of a non-specific natural place are geometrically organized and awkward in perspective while leaning toward anthropomorphism. Humor is at play. The foliage, sinuously rendred in an exaggerated fiery color palette, appears, at times, to resemble abstract playful monsters. Lincoln’s paintings explore the diametrically opposed categories of “idealism” and “realism”.

Like Henri Rousseau (1844–1910), Lincoln employs a faux-naive style of flat colors infused with subtle nuances. Compositionally, the paintings utilize a framing technique within to create the illusion of a “stage”. Devoid of figures, the theatrical content is left to the imagination of the viewer. The framing accentuates the idea of a window – a window onto another space that challenges reality and welcomes otherness. Thus becoming a meditation on nature and human projection. A dream reality.

Amy Lincoln received a MFA in Painting from Tyler School of Art, Philadelphia, PA in 2006 and a BA in Studio Art from University of California, Davis in 2003. She also received a Post-Baccalaureate Certificate from Brandeis University, Waltham, MA in 2004. Lincoln is the recipient of a 2006 Swing Space Residency from Lower Manhattan Cultural Council. She has also participated in residencies at the Inside Out Art Museum, Beijing, China and Wave Hill, Bronx, NY. Her work has recently been exhibited at Morgan Lehman Gallery, NY, Geoffrey Young Gallery, Great Barrington, MA and Monya Rowe Gallery. Lincoln lives and works in Queens, NY.