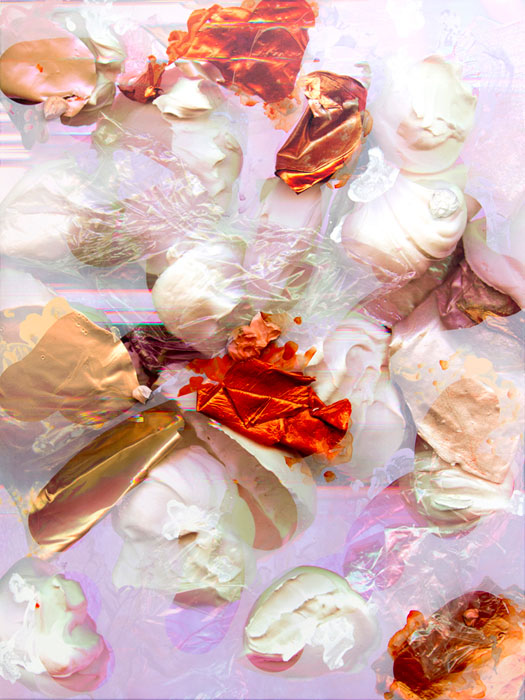 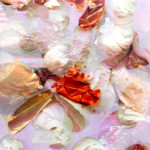 In his new exhibition “Deep Surfacing”, André Hemer continues to explore the complexity of seeing in the contemporary world. We live in a time in which we are likely to encounter everyday objects as de-materialized digital forms as much as their physical incarnations. Fundamental notions of what it means to experience and determine space, light, and illusion all have been reimagined as a result.

The paintings amalgamate different ways of looking at the same thing within a single canvas. Hemer begins his painting process with sculpted forms of dried thickened paint that are then arranged on top of a digital flat-bed scanner. With the lid of the scanner removed, digital scans were captured directly under the summer sky of Vienna.

The resulting combination of the light sources (the LED light of the scanner mixed with sunlight) manifests images that appear digital but are not produced in a strictly digital manner. The three-dimensionality of the captured forms is accentuated by saturated light and shadow, almost akin to 3D computer renderings that might suggest an infinite depth of space.

Hemer then adds translucent layers of spray paint, acrylic, oil and very think impasto to create surfaces that are both optically and physically complex. These layers both cover and activate the imagery underneath, adding areas of painterly intrusion that further “materialize” the painting and propose a depth of surface that goes beyond traditional means.

André Hemer received his MFA from the University of Canterbury with a research period at the Royal College of Art, London. He also holds a PhD from the University of Sydney. Recent solo exhibitions include “Flat-bed Plein Air” at Tristian Koenig Gallery, Melbourne, AU; and “New Representation Part III” at Gow Langsford Gallery, Auckland, NZ. Recent group exhibitions include “Antipodean Inquiry”, Yavuz Gallery, Singapore (2016), “Asemic”, Kristin Hjellegjerde Gallery, London (2015), “100 Painters of Tomorrow”, Beers Contemporary, London (2014), and “Utopian Days”, Total Museum of Contemporary Art, Seoul (2014). His work was also included in CODE Art Fair Copenhagen and Art Basel Hong Kong. He was recently awarded a six-month residency at the ISCP New York for 2017 from the Wallace Arts Trust, and in late 2016 will receive a New Generation Award from the Arts Foundation of New Zealand. He has participated in residencies at the Villa Lena Foundation, Italy; Cité Internationale des Arts, Paris; and Seoul Museum of Art, Korea. In 2014 he was included in the publication “100 Painters of Tomorrow” (Thames & Hudson, London), and is also involved in the forthcoming publication “Painting Regarding the Present” (Naives and Visionaries, Berlin). He lives and works in Vienna, Austria.