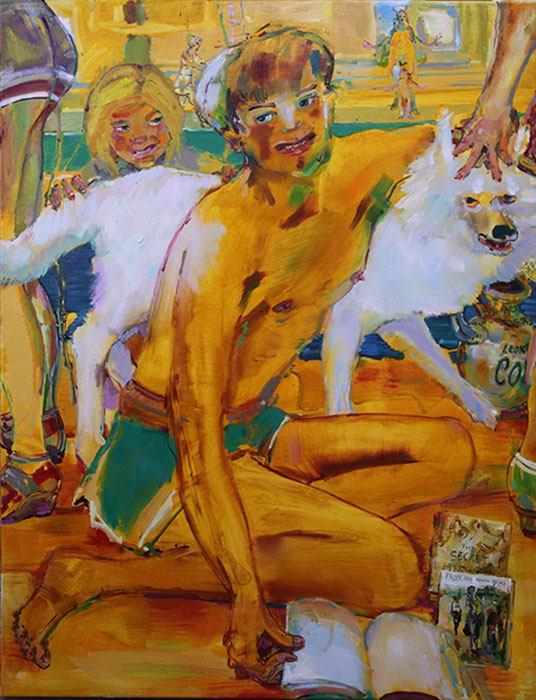 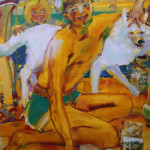 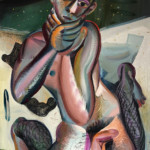 Monya Rowe Gallery is excited to present a two-person exhibition of paintings by Angela Dufresne and Louis Fratino titled “Glazed”.

“Glazed” brings together the work of two artists who share a common interest in recording their personal and intimate relationships. Transcending simple depictions of sexuality, gender and family, both artists embrace gesture, color and painterly modes of expression within the context of a queer dialogue. Collectively differing in tone yet synchronizing in stylized subject matter that embodies desire and visceral tension. Both approach painting with a sensitivity to those around them, but their greatest common ground is empathy.

Angela Dufresne‘s influences range from the psychological dramas of John Cassavettes (1929-1989) to 19th century painting. In this show, we see paintings inspired by the complexity of family, friends, gender and sexuality. Gena Rowlands may make an appearance in a “family portrait” which in turn may be inspired by the artists’ mother. In “Reading Club 1” (2017) a young boy grasps a Pasolini book while spending the day out with family at the beach. These are the times when Mothers smoked cigarettes with a baby on their lap and before the words “politically correct” were an everyday part of the vernacular. However, it’s more about a rebellious spirit, than it is about nostalgia. In this era where apathy seems to have replaced genuine emotion and communication mostly takes place behind the walls of a cell phone via social media, Dufresne reminds us of E.M. Forster’s ideology: “Only connect”.

Like Dufresne, Louis Fratino embraces an overlooked sensitivity, but here it has shifted to homoerotic portraits. Carrying an emotional impact, with a hint of voyeurism, Fratino’s depictions of lovers and friends brings to mind the late beach paintings of Marsden Hartley (1877-1943). Emphasizing muscles and body curves amid floral arrangements, his enigmatic subjects are an investigation of mood and desire from a personal and subjective view. Blurring the lines between real life and fantasy intertwined with romantic inclinations, Fratino embraces the Magic Realism in his work. Here, ordinary occurrences seem magical.

Angela Dufresne (b. 1969, Hartford, Connecticut) received a MFA from Tyler School of Art, Philadelphia, PA and a BFA from Kansas City Art Institute, MO. Dufresne’s work has been exhibited at American Academy of Arts and Letters, NY; Ogunquit Museum of American Art, ME; The Aldrich Contemporary Art Museum, CT; MOMA/P.S.1 Contemporary Art Center, NY; The Rose Art Museum of Brandeis University, MA and The Hammer Museum (solo) Los Angeles, CA. Her work was recently the subject of a two-person exhibition with Nicola Tyson at the Cleveland Museum of Art, OH. Dufresne will have a solo exhibition at the Kemper Museum of Contemporary Art, Kansas City, MO in September 2018 and is included in an upcoming group exhibition (2019) at the Contemporary Art Museum (CAMH), Houston, TX. A catalog will accompany both museum exhibitions. Dufresne lives and works in Brooklyn, New York.