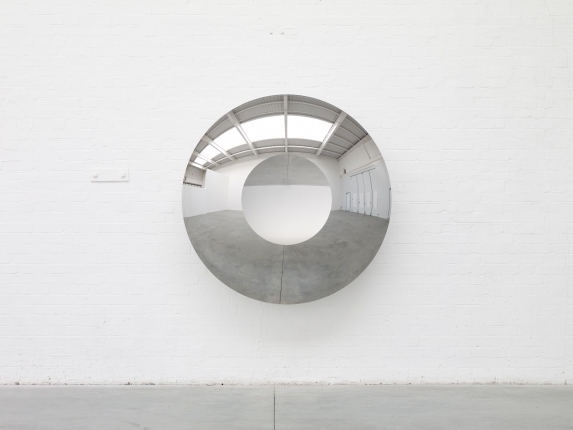 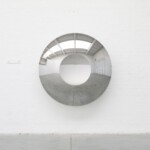 Regen Projects is pleased to announce an exhibition by renowned artist Anish Kapoor. Since the 1980s Kapoor’s ambitious practice has continuously expanded the limits of sculptural form by investigating scale, volume, color, and materiality. With this exhibition, the artist’s sixth solo presentation following his gallery debut in 1992, Kapoor brings together a selection of new mirror works that challenge optical perception and phenomenological experience through experiments in shape and form.

The cornerstone of the exhibition is a monumental stainless-steel Double S-Curve. Expanding upon a singular work originally exhibited at Regen Projects in 2006, the sculpture’s alternating concave and convex structure snakes through the center of the gallery. Simultaneously appearing both solid and liquid, its highly polished mirrored surfaces refract and reflect its surroundings, creating an illusory sense of reality that confounds one’s relationship to the space.

A new series of wall-mounted mirrors subtly shift in shape between convex and concave. Hovering at eye level each sculpture projects various geometric shapes of acute triangles, circles and rectangles, that playfully tease the viewer’s optical perception and force them to re-examine their phenomenological experience. In his landmark essay on Kapoor’s work “Making Emptiness,” Homi K. Bhaba writes, “The tactile experience of transition is caught in the virtual space in between the double mirrors. The perspectival distance between subject and object, or the mimetic balance between the mirror and its reflection, are replaced by a movement of erasure and inversion – ‘reverse, affirm, negate.’ It is as if the possibility of pictoriality or image-making, associated with visual pleasure, has been unsettled to reveal emptiness, darkness, blankness, the blind spot. However, the purpose of Kapoor’s work is not to represent the mediation of light and darkness, or negative and positive space, in a dialectical relationship in which emptiness will travel through the darkening mirror to assume the plenitude of presence. Kapoor stays with the state of transitionality, allowing it the time and space to develop its own affects – anxiety, unease, restlessness – so that viewing it becomes part of the process of making the work itself. The spectator’s relation to the object involves a process of questioning the underlying conditions through which the work becomes a visual experience in the first place: how can the conceptual be visible? How can the perceptual void be spoken?”

Anish Kapoor was born in Mumbai, India in 1954 and lives and works in London.