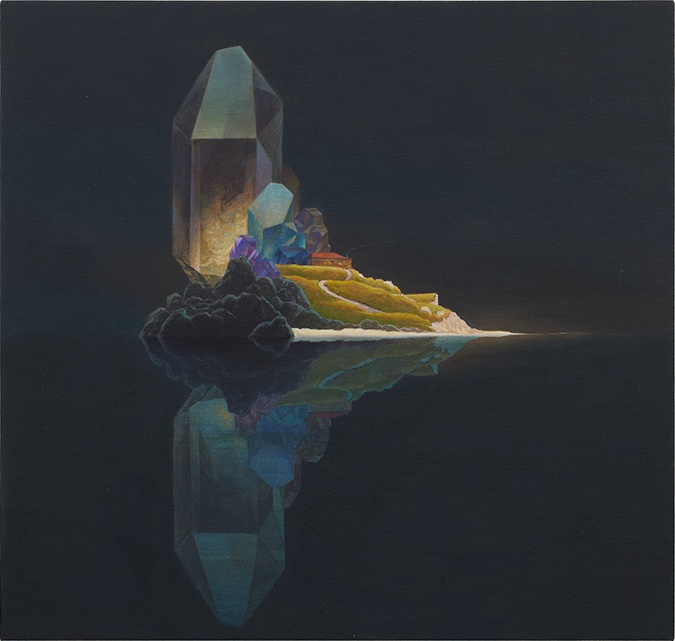 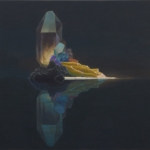 Tomio Koyama Gallery Tennoz is pleased to present “Isle of Quartz,” a solo exhibition of new works by Atsushi Fukui. This marks the artist’s first solo gallery show in three years, and presents a comprehensive overview of his latest oeuvre comprised of a selection of paintings as well as small diorama works that he has newly been engaging in.

From mushrooms and plant life such as trees, to forests, animals, people, fragments of our present everyday, music, minerals, scenes of ancient times, and the vast expanse of the universe – a world of peace and tranquillity unfolds within Fukui’s works, manifest through distant images that transcend time and space. In his previous exhibition, Fukui had depicted what he himself regarded as “Arcadia” (an ideal world) based on his hypothesis of “how the world would have become more free and full of surprise should there have been open contact between earth and extra-terrestrial civilizations over 100 years ago.”

The landscapes and motifs depicted through lucent blue tones and beautiful matière are at once realistic and recognizable, yet manifest in the form of spectacular metaphorical and philosophical worlds rather than communicating any specific meaning in themselves.

With painterly techniques and themes in his works also influenced by his childhood fascination with American and European science fiction comics, the vast natural landscape of Yatsugatake where he currently lives and works, as well as his history of distancing himself from art for ten years to pursue a career in music, Fukui has collaborated in providing cover designs for the records of musician David Silvian.

“Isle of Quartz”: Minerals, Music, and Trees All Harbor Powers Beyond Human Knowledge. The Utopia that Fukui Depicts
In this exhibition, “Isle of Quartz,” Fukui envisions a world that is even more advanced than what he had perceived in his previous solo exhibition, “Arcadian.”

Depicted are landscapes in which “the increased resonant frequencies of human beings have affected the natural world, resulting in massive crystals buried deep beneath the ground to rise to the surface.” How much time has passed since our present times to arrive at this state? Is this earth in first place, or is it somewhere else altogether? The sheer immenseness of these crystalline forms presents a world that extends far beyond any existing knowledge or understanding.

The exhibited work “Sonic Meteorology” depicts people attempting to materialize what appears like a cloud while playing music, drawing inspiration from the idea that music, which in itself is an ensemble of pleasant sounds, harbors some great power of its own.

The earth and the universe, the current, future and the past — ambiguous worlds with seemingly no determinable axis instils viewers with the sensation of being invited on a liberating imaginative journey into otherworldly realms.

We welcome viewers to bear witness to Fukui’s latest works that engage with profound themes such as the relationship between one’s own existence, nature, and the universe, as well as the concept of time, which often remain unnoticed in the context of our everyday.