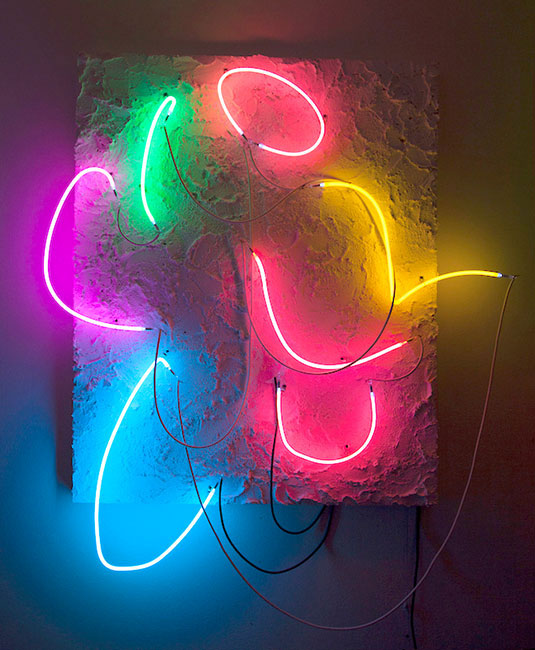 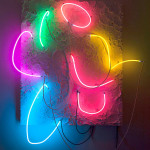 Luis De Jesus Los Angeles is please to present “The Roughs”, a selection of neon works and collages by Los Angeles based artist Brandon Andrew.

“The Goof’s head can be thought of in terms of a caricature of a person with a pointed dome – large, dreamy eyes, buck teeth and weak chin, a large mouth, a thick lower lip, a fat tongue and a bulbous nose that grows larger on it’s way out and turns up. His eyes should remain partly closed to help give him a stupid, sleepy appearance, as though he were constantly straining to remain awake…” (Character Analysis of ‘The Goof’, 1934)

The written character analysis of ‘The Goof’ – otherwise known today as Disney’s Goofy – not only captures the essence of this loved happy–go–lucky character, but also reveals the social bias of the time. Written in 1934 by one of Walt Disney’s lead animators, the character analysis provides a caricature of an impoverished man of color. The racist and classist undertones in the character analysis, constructed by members of the dominant white male class, are likely offensive to a contemporary reader, yet expose a deeper history and understanding of this prominent Disney character.

This text informs the work on display in Brandon Andrew’s solo exhibition “The Roughs”, which more broadly addresses social perspectives on race and class through a pop cultural lens. While conscious of his own white male subjectivity, Andrew adapts the style of roughs, or sketches that define the conceptual language of an animated character, to a series of works on paper and neon wall sculptures.

Andrew juxtaposes animation roughs of Goofy over found images from the 1968 Chicago Freedom Movement and Democratic National Convention. In these works, abstracted multi–color images of the Disney character overlay black and white photographs of the Civil Rights era. The formal play between these elements highlights Andrew’s interest in society’s distorted portrayals of individuals based on race and class.

Complementing the collages is a series of unique neon works. Made of white stucco wall fragments, the artist abstracts the Goofy roughs with neon light tubes, which project color onto the surface of the stucco. In doing so, Andrew performs the role of Disney animator by repeating the act of projecting a colored story onto a white facade. The stucco and neon also reflect Andrew’s native terrain of Los Angeles, an epicenter of cultural production. Andrew uses the disarming and fun character of Disney’s Goofy as a case study to investigate the ways in which negative stereotypes permeate the cultural landscape, prompting viewers to reflect on their own social perception.

Brandon Andrew (b.1982) lives and works in Los Angeles. He has presented solo exhibitions at Composing Rooms, Berlin, and New International Cultural Center, Belgium. His work has been included in group exhibitions at the Museum of Fine Arts Boston, Museum of Contemporary Art (MuHKA) in Antwerp, Family Business in New York, and Human Resources in Los Angeles, among others. He was also included in “The Road” (2014) and “Tilt–Shift LA” (2012), both at Luis De Jesus Los Angeles.