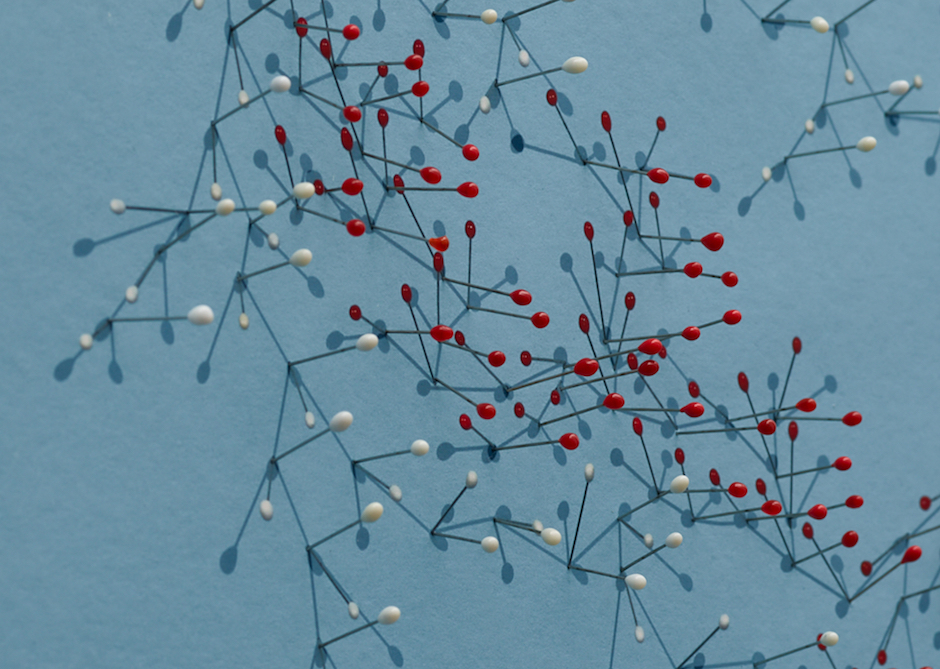 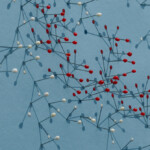 Christiane Feser’s works are photographs of complex assemblages of repeated forms and shadows with actual elements from the assemblage projecting three-dimensionally from the surface of the photograph. Feser flattens a sculptural object through the act of photography and then reconstitutes that dimension in a new way by turning the photograph into a relief sculpture. The works challenge our perception of dimension and perspective as well as our assumptions about what a photograph is. They also introduce a tension between the past and present: the original photograph is of a thing that has existed, but it has been transformed into a new object that now exists. And in this new form, the constant change of light and shadow across the relief surface will continue to keep the work in the present moment.

The German word “Felder” has two meanings, it may refer to an agricultural field or field of color, or it may refer to a part of a grid. Each work in this series starts with a drawing of a grid that has been distorted from a flat plane into a sort of topography with dots or spheres of different sizes along the lines. What at first seems to be a perspectival, is quickly revealed as something that does not follow the rules of perspective: various parts go in and out of focus, and the dots vary in size as if closer or further away from the camera lens. Feser further confounds the rules of optics by introducing non-photographic, lacquer semicircular spheres protruding from holes in the paper’s surface. The works are therefore about both photography and sculpture. They are simultaneously images and objects that play with flatness and depth, and engage with histories of the photograph as a physical thing in space.

The works in both the “Gitter” (Grid) and the “Nullpunkte” (Zero points) series are photographs of assemblages of sewing pins and their shadows alongside actual pins in the paper. Both series are a bit like drawing, line based, using shadows instead of ink, and allude to the origin of the word photograph which was derived from the Greek words photos (light) and graphein (to draw). The work is always evolving because the shadows created by the actual pins on the photograph change significantly depending upon the play of light across the surface. In each Gitter work, Feser tries to draw a grid from the placement of the pin at the end of the previous pin’s shadow. In Nullpunkte, Feser follows the same rule for placing the pins but, instead of trying to create a grid, she allows the composition to evolve without a preconceived compositional structure.