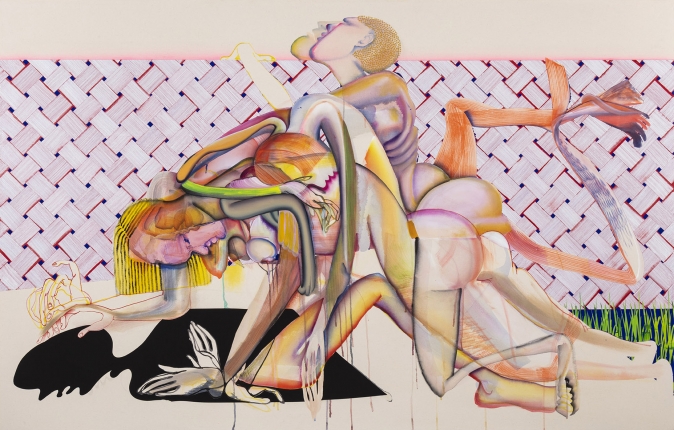 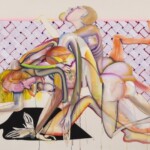 Regen Projects is pleased to announce “But I Woke Jus’ Tha Same”, an exhibition of new paintings and drawings by Los Angeles-based artist Christina Quarles. This marks her first solo presentation at the gallery.

Quarles’ seductive paintings feature polymorphous figures arranged in contorted positions in space, rendered through expressive and gestural strokes that teeter on the edge of abstraction and representation. Referencing the history and techniques of painting, her work propels forward the limits of her chosen medium, and is informed by her multiply situated identity as a queer woman of mixed race. Dynamic compositions feature bold patterns and decorative motifs such as flowers, latticework, and plaid tablecloths – feminine tropes that reference domestic space. Yet the subjects in Quarles’ paintings simultaneously inhabit interior and exterior space. Perspectival planes both situate and fragment the bodies they bisect, representing the boundaries that demarcate a space from the individual, and expanding the limits and potential for representation.

Similar to her paintings, her drawings deftly combine pictorial elements using economy of line with cross hatching, and other modes of mark making, to create form and depth. Punctuating the picture plane, or outlining a figure, text additions in the form of puns or poetic wordplay often reference pop culture, situating the works in our time.

Christina Quarles was born in Chicago, IL in 1985. She received a B.A. from Hampshire College and an M.F.A. from Yale University in 2016. That same year she attended the Skowhegan School of Painting & Sculpture. She lives and works in Los Angeles, CA.

Quarles has been the recipient of a number of awards and grants including the Pérez Prize (2019); Rema Hort Mann Foundation Emerging Artist Grant (2017); and the Robert Schoelkopf Memorial Traveling Fellowship at Yale University (2015); among others.