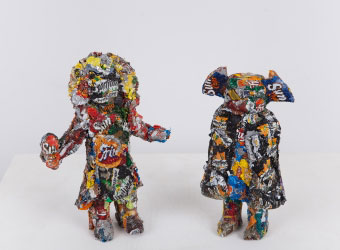 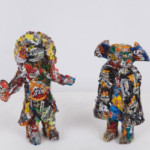 Using a microwave oven, Languell shrank hundreds of chip bags. Non-biodegradable, the bags find new life as the “bodies” of the kachina dolls.

Kachinas have a history dating to the mid 19th century or earlier. Around 1850, Hopi Indians carved wooden figures to make dolls that were used to instruct young women about deified ancestral spirits and their influence over the natural environment. During the early part of the 20th Century, kachinas became a commodification of Native American culture and were incorporated into Western artistic practices.

The title of the exhibition, “Great Value”, brings to mind new products, low prices, and issues of mass consumption. The phrase brims with promise, yet poses the potential of overconsumption and waste.

Dylan Languell (b. 1985) received his BFA from Virginia Commonwealth University in 2011. He lives and works in Hudson, New York.