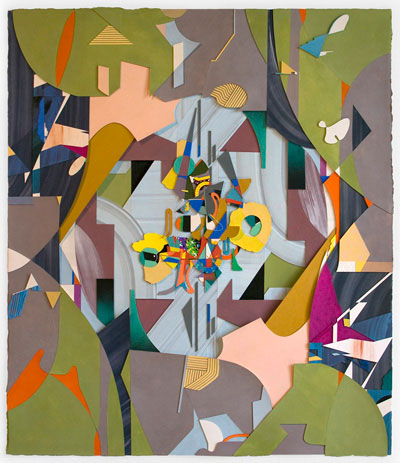 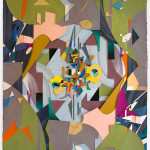 The paintings, works on paper and sculpture on view are linked by saturated color, textured surfaces and replication of forms. Mirroring, symmetry and tactility suggest both growth and abundance.

Douglas Melini‘s paintings reflect his interest in networks and systems and how visual space and actual space move in and out, back and forth, up and down. Painted acrylic grids underlie gestural applications of oil paint. Ultimately, the two acts marry with one another to create a dense mesh of efficiencies and errata, all held in a hand-painted frame.

Loie Hollowell‘s paintings and pastels depict archetypes of the body pared down to essential, meditative elements. Color speaks in an excited code. Reds seem to throb in heat, blues run cold onto the eyes, and yellows vibrate with excitement and climax. A variety of paint textures – smooth, swirled and sponged – expand further the physical aura of her work.

Carl D’Alvia‘s sculptures of veiled figures/forms ape both minimalism and the baroque. Working in bronze, ceramic and resin and drawing on sources as varied as megalithic monuments and toy design, each work seems serious and celebratory at once. Shrouded and difficult to categorize, his sculptures are installed both inside the gallery and in the garden.

Jim Gaylord has had two solo exhibitions with the gallery, has received both Pollock-Krasner and Joan Mitchell Foundation Grants and has been an artist-in-residence at The MacDowell Colony and Yaddo. Douglas Melini’s solo exhibitions include Eleven Rivington, Feature Inc., Minus Space and White Columns (NY) and the The Suburban (IL). Loie Hollowell received her MFA from Virginia Commonwealth University in 2012 and will have an upcoming solo exhibition this fall at 106 Green, Brooklyn. Carl D’Alvia has had numerous solo exhibitions both nationally and internationally. He is a recipient of The Rome Prize 2012-2013.