Elliott Hundley – There Is No More Firmament 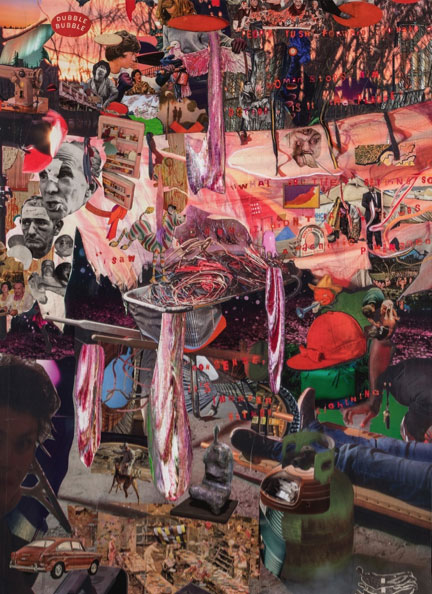 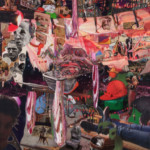 Regen Projects is pleased to present an exhibition of new work by Los Angeles-based artist Elliott Hundley. On view will be a series of billboard collages and a sculpture that form an ongoing visual narrative. This will be the artist’s fourth solo presentation at the gallery.

Known for his dense multimedia compositions that reference both art history and mythology, Hundley’s work weaves together scenes from the past with familiar imagery taken from the contemporary world. Whereas previous bodies of work have focused on classical Greek tales such as Euripides’s tragedy “The Bacchae”, this exhibition presents a shift in subject matter, moving from antiquity to the modern, and is loosely based on Antonin Artaud’s play “There Is No More Firmament”. Devoid of a traditional narrative structure and identifiable protagonists, the play utilizes visuals, sound, gesture, and language to confront the viewer and create an impactful, visceral state of chaos.

Referencing similar mechanisms employed in Artaud’s theory of the “Theatre of Cruelty”, Hundley intricately crafts his tableaux from a wide-ranging selection of materials and sources. Each billboard collage represents a different state of anxiety – of surroundings, society, the body, and of being and mortality – and features a synthesis of painting, drawing, sculpture, collage, photography and performance. Beginning with an elaborate photo shoot in which his friends and family are cast to embody characters or ideas expressed in the narrative, the resulting photographs are blown up, cut up, and affixed onto the surface of the works. Through a process ranging from gradual accumulation to spontaneous mark making, Hundley builds up the surface of his works using paint, magazine cutouts, fabric, straight pins, found objects, and other materials sourced from his extensive archive. These formally elaborate constructions play with abstraction and representation, inviting the viewer to create narrative and meaning.

“This constantly mirrored interplay, passing from a colour to gesture, from cries to movements, endlessly leads us along rough paths that are difficult for the mind, pitching us into that uncertainty, that indescribably anxious state most suited to poetry.” (Antonin Artaud, On The Balinese Theatre, The Theatre and its Double, 1938)

Elliott Hundley (b. 1975) received his BFA from the Rhode Island School of Design (1997) and his MFA from the University of California, Los Angeles (2005). The artist lives and works in Los Angeles.

In 2011, Hundley’s major solo exhibition “The Bacchae” opened at the Wexner Center for the Arts in Columbus, OH and traveled to the Nasher Sculpture Center, Dallas, the following year. His work has been featured in numerous group shows, including the Museum of Contemporary Art, Los Angeles (2015, 2013 and 2009); International Center for Photography, New York (2013); Louisiana Museum of Modern Art, Humlebæk, Denmark (2012); New Museum, New York (2010); and Guggenheim Museum, New York (2007).