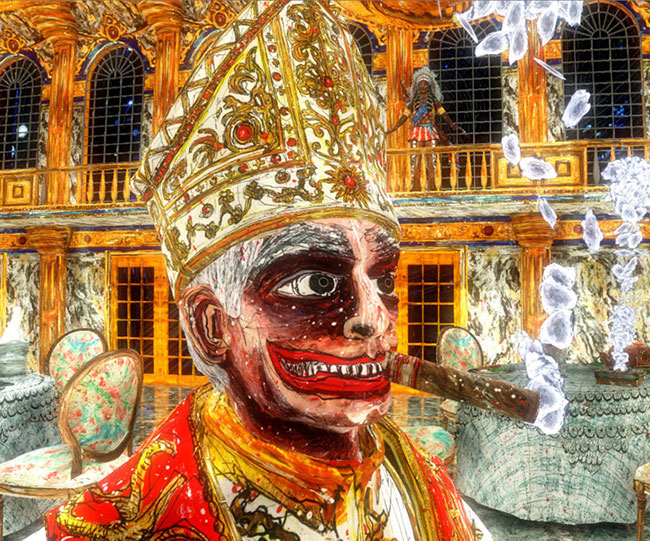 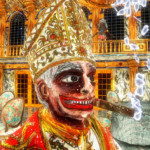 Federico Solmi’s new series of animated video works parody the iconography of historical portraiture through a group of absurd and grotesque portraits of the world’s most feared and beloved leaders – presented as members of “The Brotherhood”, a secret society whose conspiratorial goal is to keep chaos alive in the world and promote the degeneration of human race.

“The Brotherhood” advances Solmi’s biting critique of a present-day dystopian society that inexorably continues to regenerate and renew itself, even as it falls apart in front of our eyes. In hand-drawn, color-saturated, satirical videos Solmi torches the veneer of mystique and aura surrounding these legendary figures from the past. He exposes history as a propaganda-fabricated ruse, manipulated and carefully crafted to suit their ideals and selfish interests.

For this exhibition Solmi has created more than a dozen new videos that will be presented on flatscreen monitors encased in elaborately hand-painted and gilded frames. These works include a series of portraits installed in the front gallery that depict individual figures posing and preening, as if before a gloating audience. In the back gallery, the artist will present an installation of five unique videos arranged in the form of a classical amphitheater depicting a gathering of figures at a historic mansion, played out in five different scenes.

In his work, Solmi underscores how skewed, incomplete, and irresolute our knowledge of the past is, and challenges us to question that knowledge, particularly how our own views and biases may be perpetuating the myth. “The Brotherhood” seems to affirm that throughout the history of humanity politics and government has always been a ruthless activity for the powerful and the rich (not unlike today), an elite game where the common person is simply nothing more than a voyeur to an engrossing spectacle.

“There’s something missing in all writings about power: Very few are able to capture how funny it is. When they examine the horrors that power commits, the sufferings it imposes, the blood with which it stains itself, historians and political scientists always forget to highlight the ridiculous aspects of the inevitable monster and how funny they are, with their ironed uniformed, unearned medals and invented awards.” (Oriana Fallaci, Interviews with History and Conversations with Power)