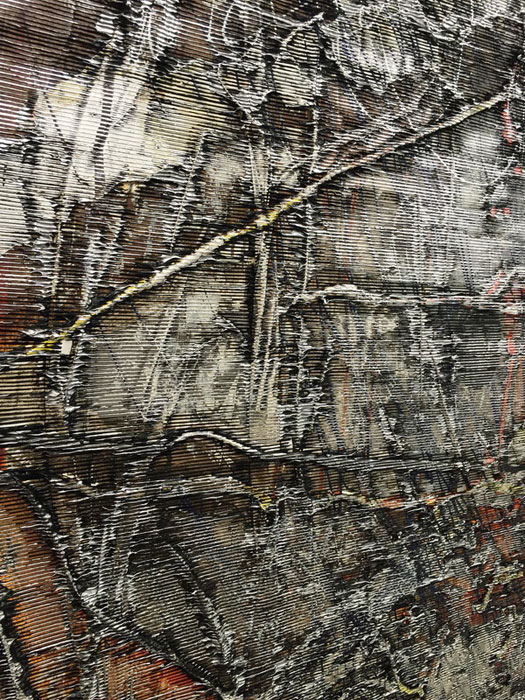 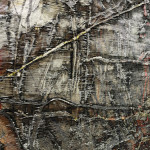 Simon Lee Gallery is proud to present for the first time in Asia, an exhibition of new works by New York-based artist Garth Weiser. Working in combined layers of line and colour, Weiser’s gestural and literal carvings cut up the painting in a built up tension between the intricate syntax of abstraction and the paintings’ physical surface. Marked by materiality, textures, burnished surfaces and a striking synthesis of addition and negation, the intensely textured paintings point to Weiser’s implicit observations of the evolution in the practice of painting.

Poised between hard-edge painting and expressionism, Weiser’s work reveals a new engagement with composition, agency and intention, confronting abstract expressionistic tropes with the use of different effects, procedures and materials. The layering strata of pigment in the paintings, complicates the distinction between areas of colour and line – creating a sense of uncertainty to the identity of each. Surfaces absorb light and reflect it unevenly, keeping the viewer mobile by optical instability and lack of figure-ground distinctions. While abstract, the works are still illusionistic, and shadows, gradations of colour, a sense of movement, variations between light and darkness, rippling waves, wood grain, and reverberating lines of contour are evoked in the undulation of palette and seismic surface criss-crossed with diagonal striations.

In this set of new works, Weiser continues using versatile aesthetic strategies in a dynamic progression to maintain a constant interplay between the spontaneous and consciously rendered. The contrast of dense metallic contour and relentless demarcation test formal limits in a shifting discourse of destruction and renewal. A sense of time manifests in the different ways and speeds with which he applies paint, building and expunging surface areas of thick impasto, creating abstracted sections of varying patinas and segments beneath the obliterated surface are defaced to reveal the underlying layers. The charged language of the five paintings demonstrates phenomenal peculiarities and tactile detail achieved by changes in colour, weight, visual rhythm, and density. The layers of impasto weave a complex barrier and swooping marks, flashing pigment is partially perceived behind the facade of an austere palette and raked, scarred lines. Subjecting expressionistic action to forms of mediation, Weiser’s paintings are at once volatile and precise, resonant with a powerful frontality that refuses conclusion.