Grant Foster & Georgia Hayes – A Stone in the Mountain 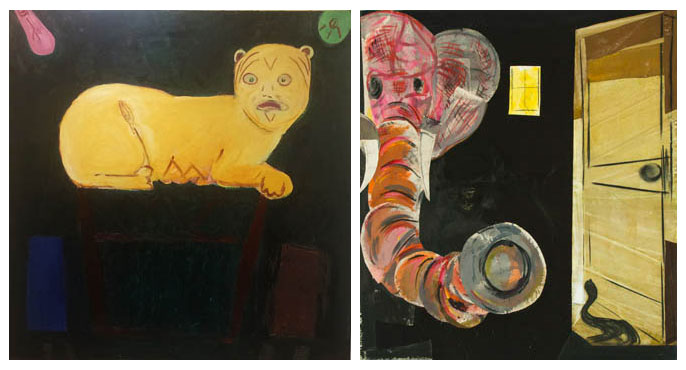 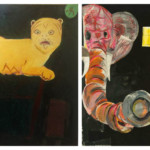 ‘What is the stone in the mountain?’ asks Grant Foster.
‘I think it could be a rock, a pebble, a lump of crumbly shit, or like every other one, or beautiful, unique or just odd’, answers Georgia Hayes.

Grant Foster and Georgia Hayes are both figurative painters whose work eschews trickery, subverts straightforward representation and instead deals with directness, essence and instinct. Painting for both Foster and Hayes is a verb – to do.

The idea for the show was arrived at during conversations between the artists in Hayes’ East Sussex studio, which continued in an exchange of emails:
‘What happens when dumb is actually highly sophisticated and deeply woven into the schematic complexities of Giotto, Sassetta and Piero della Francesca?’ asks Foster. ‘Where flatness is directness – and an active affirmation against trickery, where the bend of a leaf in an eternal garden, doubles up as a schematic on an ordnance survey map?’
‘Flatness in paintings happens when passion and belief is absent,’ counters Hayes. ‘Form and depth can be captured in the paint without using mathematical mapping and perspectival and graphic illusion. It is what makes a painting powerful, alive, but it is elusive and hard to describe in words. This thing is embodied in the paint’

As for the stone in the mountain of the title, Hayes explains: ‘A stone in the mountain was something Roy (Oxlade) once said to me when I was getting over the worry of trying to join so many accomplished artists and thinking what was the point of one more hoping to be something (my parents used to try to discourage me from painting by citing Picasso and saying that all that needs to be done, has been). In these days of celebrity and “me, me, me” it may be a novel thought to be one of the community of artists that make that mountain for everyone.’

Grant Foster is a London based artist who completed an MA in Painting at the Royal College of Art in 2012. Recent selected solo exhibitions include: “I’m Not Being Funny”, Lychee One, London (upcoming, 2019); Trade Gallery, Nottingham (2018); “Ground, Figure, Sky”, Tintype Gallery, London (2017); “Popular Insignia”, Galleria Acappella, Naples (2016), “Salad Days”, Ana Cristea Gallery, New York (2015); “Holy Island”, Chandelier Projects, London (2014). In 2016 Foster was Fellow in Contemporary Art at The British School at Rome and in 2019 he will hold the Randall Chair at Alfred University, New York.

Georgia Hayes is represented by Paul Stolper Gallery, London. From 1977-82 she was a student of Roy Oxlade. Her solo exhibitions include, “Jam Rock”, Paul Stolper Gallery, London (2016); “Spellbound”, Sardac Gallery, Lectoure, France (2014); “Sing Out Loud”, Transition Gallery, London (2013). Group exhibitions include, “Too Cute/Sweet is about to get Sinister”, Birmingham Museums, selected by Rachel Maclean, (upcoming, 2019); “One Day Something Happens”, Arts Council Touring selected by Jennifer Higgie (2015-17); Hayes has been selected for the John Moores Painting Prize 18 and 25 and has been shortlisted for the Royal Academy Charles Wollaston prize three times.