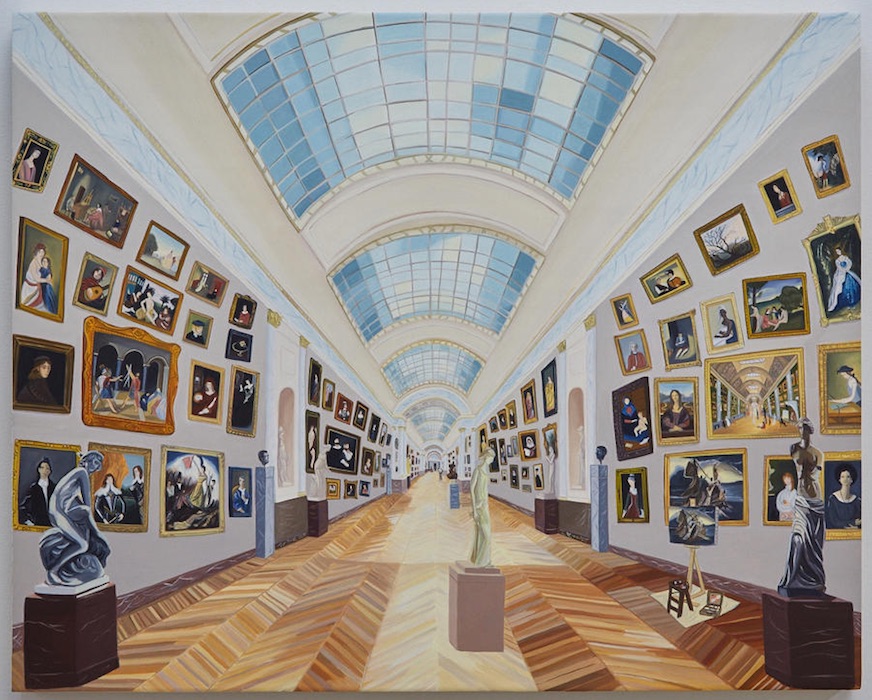 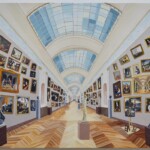 Monya Rowe Gallery remains temporarily closed to the public, but is excited to engage with our community by sharing images of Gretchen Scherer’s solo exhibition titled “Love Letters”. For now, the exhibition is available to view online.

Scherer’s paintings of interiors are reimagined depictions of museums or gilded homes displaying historic collections. After studying a collection online, Scherer selects her favorite paintings and sculptures from each museum. The painted rooms, subtly manipulated, are bursting with these masterworks painstakingly recreated in miniature form, and arranged floor-to-ceiling in a Salon-style installation recalling 18th century exhibitions. Ordinarily closed closets and cabinets are open, and hallways are seemingly endless. Informed by internet searches, books on interiors, and imagination, Scherer lovingly scrutinizes a museum collection and space by envisioning it anew. Now a version of the original.

Some of the institutions depicted in the exhibition are the Hermitage Museum, Saint Petersburg, Russia; The Wallace Collection, London, United Kingdom; The Louvre, Paris, France; The Frick Collection, New York; and the Ham House, London. In “The Missing Works, After Caspar David Friedrich” (2020), Scherer depicts a selection of stolen artworks found on an FBI database, including the still-missing paintings from the infamous 1990 heist at the Isabella Stewart Gardner Museum in Boston. The lost paintings depicted, suggestive of spirits, are seen through the various windows of a 17th century gothic mansion inspired by a Caspar David Friedrich (1774-1840) painting.

There is a felt absence in Scherer’s paintings which are deliberately devoid of figures. Although the work engages with themes of loss and attachment, a playfulness emanates. In “The Wallace Collection After ‘The Swing’” (2020), a swinging chandelier, positioned between two columns and an ornate table doubles as a character on a swing. In the background, with careful inspection, Jean-Honore Fragonard’s (1732-1806) “The Swing” (1767) can be seen.

The excess of imagery challenges the viewer’s relationship to space, memory, and objects. Embracing a contemporary interest in the ways in which objects are experienced – the artist has never visited some of the places depicted – Scherer hints at the current image-saturated culture that social media forces upon us. An intersection of art history and the modern world.

Gretchen Scherer (b. 1979, Indianapolis, IN) received a BFA from The University of Illinois at Chicago, IL and a MFA from Hunter College, NY. Residencies include Skowhegan School of Sculpture and Painting, ME and Vermont Studio Center. Recent group exhibitions include Tillou Fine Art, Brooklyn, NY and Booth Gallery, NY. Scherer’s work was selected by Jerry Saltz of New York Magazine for the upcoming “New American Paintings” Northeast Edition (2020). This is the artists’ first solo exhibition at Monya Rowe Gallery. Scherer lives and works in Brooklyn, NY.